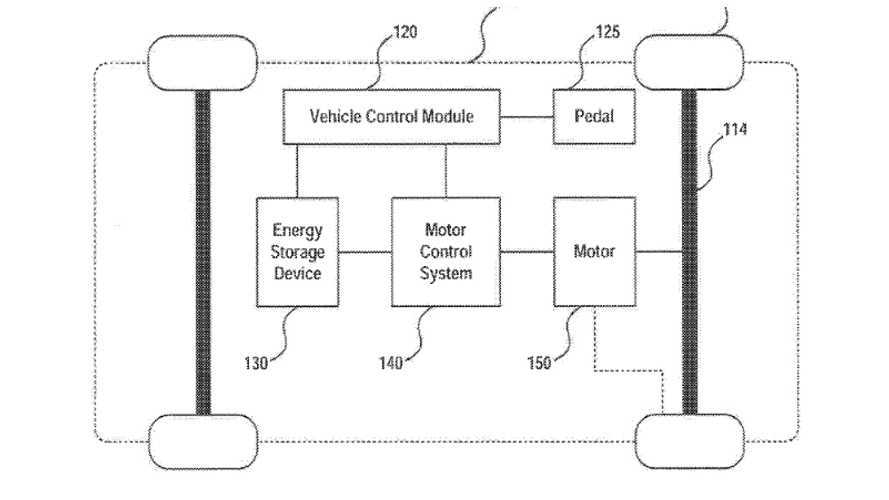 Patent says: "Current research and development efforts on improving the acceleration performance of electric vehicles focus on increasing the output power of the electric motors and the batteries. This approach is similar to the one followed by the R&D community of the gasoline cars, in that an electric motor is often seen as a counterpart of an internal combustion engine and a battery is often seen as a counterpart of a fuel system. The specific properties of the electric motor control system and their relationship with the torque output ability of the motor, however, have not been adequately explored. The present disclosure is directed to improving the motor control system of an electric vehicle to provide additional torque output, thereby further improving the acceleration performance of the electric vehicle."

What this might mean: Gas-powered vehicles have had 100 years to evolve into the powerful beasts they are today. Even so, modern electric vehicles are quickly catching up when it comes to performance and driving style. Most EVs easily beat their ICE counterparts in acceleration tests, but Faraday Future thinks that there might be a way to make battery-powered cars even quicker. Instead of simply throwing in a more powerful motor, what if you could drive the motor with an inverter? Could you improve performance that way? Faraday Future wants to find out.

IBM's plan to have agents charge your EV

What this might mean: The letters "IBM" are not usually the first three that you think of when you think of roadside assistance, but a new patent from Big Blue shows that the computer and electronics giant just might want to get involved with helping cars get back on the road. In this case, IBM is suggesting using the cloud to monitor a fleet of vehicles and to dispatch workers to go and refuel or recharge those vehicles when their gas tank/battery drops below a certain level. While IBM says this service could be used to refuel a gas or diesel vehicle, the real target here is EVs:

The pro-active mobile refueling service is particularly beneficial for electric vehicles which have limited battery power, as compared to internal combustion vehicles which can run hundreds of miles on one tank of petrol. The pro-active mobile refueling service effectively extends the range of electric vehicles, allowing for worry-free long road trips. The cost savings are significant because it eliminates the need to build a network of fixed battery stations as in the current petrol station paradigm. Instead, a fleet of service agents is dispatched to deliver EV batteries or battery charging when needed.

As cool as this all is, we were more impressed with Ford's self-driving, auto-charging EVs from our last patent round-up.

What this might mean: Charging up a lot of big EV batteries is not an insurmountable challenge for electric utilities, but managing a lot of batteries in a lot of buses does require some thinking. That's where Proterra's patent comes in. The technology described here figures out the maximum amount of energy that can be fed into a number of EVs plugged into charging stations so that the  demand billing rate does not increase. With this sort of logic in play, "significant savings may be realized by controlling the charging of the vehicle based on prevailing utility cost," Proterra says.