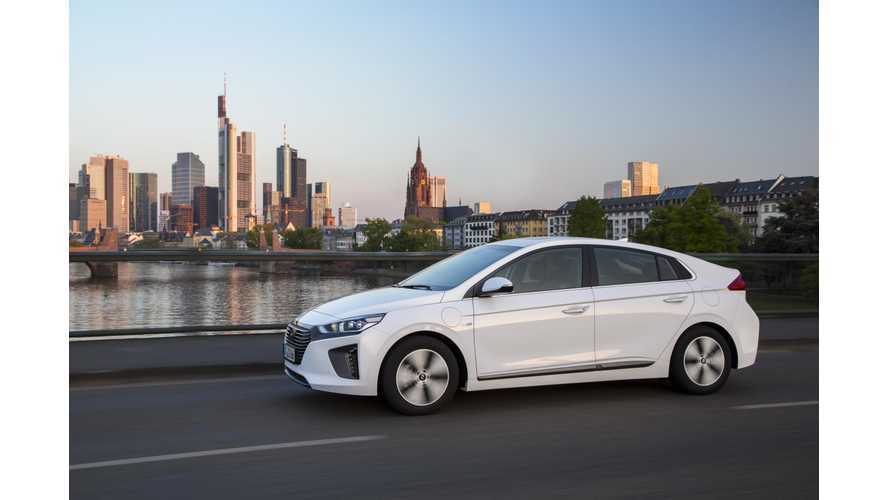 After more than a few delays, Hyundai is finally introduction the IONIQ Plug-in Hybrid in Europe, beginning in the UK on July 13, with fairly aggressive pricing.

However, if one wants to extrapolate that price to other regions, and the Hyundai IONIQ Electric (BEV) is already on sale, it's easy math, as the two have the same starting MSRP.

In the US, the IONIQ Electric retails from $29,500, with the PHV version to arrive this Fall nationally - so we expect similar pricing.

We should mention that the plug-in Hyundai is locally priced considerably less (£4,200) than the new Toyota Prius Plug-In (aka Prime) at £29,195. The IONIQ is also equipped with a similar battery pack to the Prius Plug-In; a 8.9 kWh pack is found in the IONIQ Plug-In, and 8.8 kWh inside the Prius Plug-In.

What's more interesting, the base IONIQ Plug-in is equipped decently at the entry level pricing.

Their is also a 7 kW home charging station on offer, made by POD Point that will cost £300, including installation.

The new model is available in Premium and Premium SE specification. The former offers a high level of standard equipment, including: 16” alloy wheels, Bluetooth, Apple Car Play and Android Auto, Smart Cruise Control and an 8-inch integrated satellite navigation unit. Unique to the IONIQ Plug-in Hybrid variant, the navigation system features state-of-the-art ECO-DAS technology. ECO-DAS has predictive energy management that optimises the battery charge and discharge, as well as a coasting guide for the driver, instructing them when to lift off the throttle to use less fuel.