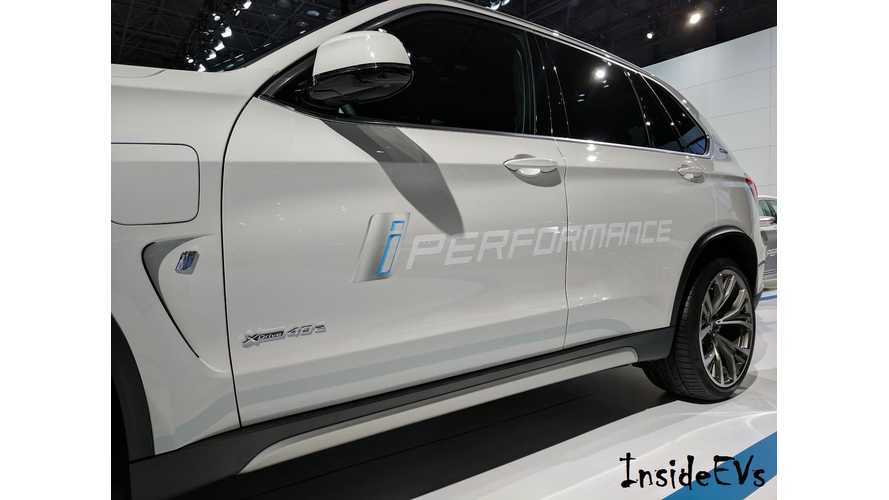 I had the opportunity to sit down with BMW NA’s top man when it comes to electric vehicles, Jose Guerrero at this year’s New York International Auto Show. Guerrero is BMW i’s North American Product & Operations Manager, and has been working in BMW’s electric vehicle programs since the ActiveE pilot program began in 2011.

Just before we started the interview, it was announced that the BMW i3 was named the inaugural winner of the World Urban Car Award, so I asked Guerrero for his thoughts on the i3 winning yet another award.

“I think it’s a testament to the car. Even though we’re making incremental improvements, like software updates and offering a moonroof, the only real dramatic improvement we’ve made is the addition of the 94 Ah battery.

That said, the car is still remaining relevant with the backdrop of increased competition in this segment. So, to see the continued accolades for a car that launched over three years ago is a good sign, and rewarding to us. But we’re not stopping; we’re continuing with product improvements on a fairly short basis, verses the traditional BMWs.”

There isn’t much more news to report on the i3 & i8 at NYIAS this year. The i3 is scheduled for a minor refresh in 2018, but BMW isn’t publicly commenting on that yet. It’s been widely speculated that in addition to the refresh, a new i3 Sport model will be offered, and many spy photographs of what appears to be this version have already been posted online. I wouldn’t expect BMW to comment on this until the formal introduction of the 2018 i3, which will likely happen at the Frankfurt Motor Show in September.

We then moved to the topic of BMW iPerformance vehicles, which have a prominent placement on this year’s show floor at NYIAS. BMW now offers four plug-in hybrid iPerformance vehicles, the X5-40e, 740e, 330e and the just-introduced 530e. Guerrero said they are selling very well, and the dealers are selling them as quickly as they come in. He added that the supply is going to increase as the year goes on, but has faith that the dealers will continue to sell them nearly as quickly as they get them because the demand is there.

I then mentioned that some EV enthusiasts are critical of PHEVs that have low all-electric ranges, like the iPerformance line offers, and asked for his thoughts on that.

“The market for iPerformance is still in the early stages, and the success we’re having is really taking place at the dealership level. With BMW i, we had to work harder to find the customers and cultivate sales for the i3.

Not everybody is ready today for a fully electric vehicle, even if his or her driving profile matches what the i3 offers. We understand that this switch to EVs won’t happen overnight. We need to get people used to plugging in their cars and experiencing the benefits of electric drive first.

That’s the job of iPerformance vehicles, it’s really converting a lot of people to the plug. That experience may lead them to purchase a longer range PHEV the next time around, or it may lead them to an all-electric car.

Not everybody is ready for an all-electric vehicle at this point. I am (Guerrero has been driving an i3 since 2014), I know you are (referring to me), but for many who aren’t, iPerformance vehicles are the sweet spot.“

I then asked him if BMW of North America is ever going to participate in the i3 Battery Retrofit Program that BMW AG announced last year.

The program is currently only available in a select few European countries, and BMW of North America hasn’t commented on whether they will ever offer a battery upgrade program. I think I was able to get (kind of) the first official confirmation that BMW of North America will offer a version of a battery upgrade/retrofit program at some point in the future, and that they are already testing internal fleets of retrofitted i3s.

“Absolutely. Even though we made the decision to not offer this option today, we’re still conducting our own internal study with a fleet of i3s that we’re retrofitting with battery upgrades to learn from and study for the US-specific group.

Even though we don’t have a consumer offering, internally we have fleets running around learning the benefits and challenges. So we’re not stopping, just because we didn’t initially offer it. As long as there is a viable consumer program that people would buy, of course we will offer it.

There’s also a sustainability side to this. There’s stationary energy storage, there’s the smart home and solar story that are tied to the ecosystem with home energy storage. We know even if there isn’t a car-to-car alone business case for upgrade, it works from the whole 360-degree sustainability model. We are looking at this holistically; we want to say to the customer: Here it is; solar, battery for energy storage, the Internet of Things, and your electric car. This is how it all works.”

At this point my allotted interview time was coming to an end, so I asked Guerrero if there was anything he’d like to add to our discussion.

"First and foremost, I’d like to say we’re listening to our customers. We’re taking in all of the feedback we’re getting from our current plug-in customers and our dealers, and we’re learning from that. Things like the numeric state of charge gauge. Our customers asked for it and we added it. Lesson learned. ''

The next generation of electric vehicles we offer will benefit from all of the feedback we’re getting today. We’re going to continue to improve and innovate. But we realize the future is always changing, whether it be inductive charging, or high speed DC fast charging we will be there and continue to innovate. However, we will still rely on customer feedback, so we always want to keep that conversation alive.”

Our thanks to Jose Guerrero, BMW i’s North American Product & Operations Manager, for his time.