Proterra Delivers 100th US E-Bus, Says It Now Owns 60% Of The Market 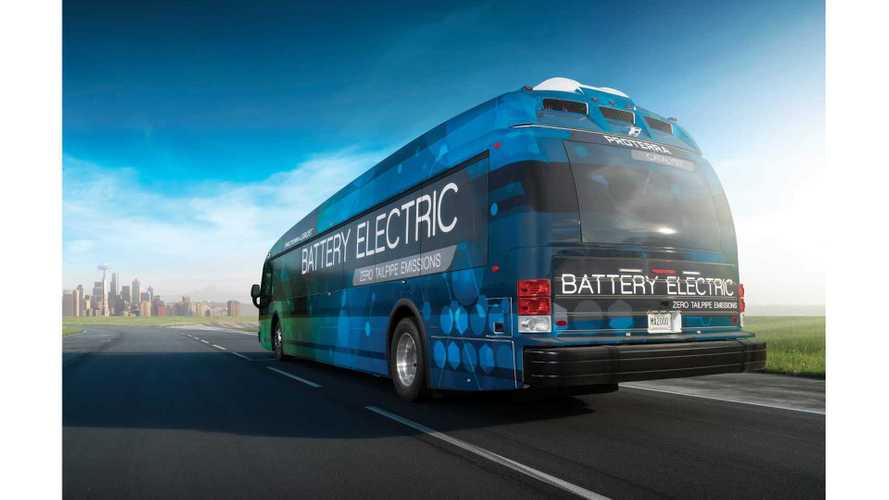 Proterra has reached a milestone of 100 electric bus deliveries.  The company can now boast more than a 60% share in the North American battery-electric transit market.

The 100th bus went to San Joaquin RTD, which has already received 12 deliveries previously...which we suppose means that the local transit authority accounts for some 8% of all electric buses in operation in the US as well.

In total, Proterra's buses have now completed over 3,100,000 miles in revenue service.

The largest upcoming order, for some 73 buses, comes from Seattle's King County Metro; while the total orders (including those delivered) now stands at more than 380, so Proterra has a nice backlog to keep production humming along.

As a comparison, BYD noted around 300 electric buses built earlier this year, but together with other manufacturers have yet to reach 100 deliveries in the US. Worldwide; although perhaps with this announcement from Proterra we may soon hear an update on how those ~300 buses are making (or have made) their way to transit customers.

As a point of reference on the scale of Proterra, and the US e-bus segment in general, BYD delivered its 10,000th electric bus a year ago, and crossed 15,000 sold in China this past February...so Proterra still has a long way to go to be competitive relative to the Chinese company on a global scale.

"Today Proterra, the leading innovator in heavy-duty electric transportation, announced that it delivered its 100th battery-electric bus, destined for San Joaquin Region Transit District (RTD) in Stockton, Calif. This record deployment marks Proterra's continued leadership in the North American electric mass transit market, in sales, deliveries and repeat orders. The company is leading the industry with over 60 percent of sales since the industry's inception. With 36 different municipal, university and commercial transit agency customers in 20 states from coast to coast, Proterra has now deployed its best-in-market, zero-emission buses in some of the nation's most innovative cities and communities. Many of the transit agencies serving these communities have also completed third and fourth orders for Proterra® buses including San Joaquin RTD, King County Metro in Seattle and Foothill Transit in Pomona, Calif.

Serving more than 687,744 people in San Joaquin County, RTD has added ten more Proterra Catalyst® battery-electric buses to its expanding fleet, bringing their total number of Proterra buses to 12. As the first agency in Northern California to operate all-electric technology, San Joaquin RTD exemplifies the growing trend among transit organizations to transition to zero-emission buses as the cost and performance benefits become clearer."

"To date, Proterra buses have completed over 3,100,000 miles in revenue service, which equates to ~ 6,000 tons of GHG emissions reduced and over $2M saved in fuel and maintenance costs. On a total cost of ownership basis, these vehicles can save transit agencies up to $459,000 per bus over diesel-hybrid vehicles and up to $448,000 vs. diesel vehicles over their lifetime. Combined with the environmental benefits of a more efficient technology at 21 MPGe, vs. 4 MPG for diesel, and zero tailpipe emissions, this dollars-and-cents argument for transit electrification has attracted sizeable orders from customers like Seattle's King County Metro, which placed the largest order of battery-electric buses to date by committing to 73 Proterra vehicles."

"Proterra has helped us save funds, reduce greenhouse gas emissions and provide clean, quiet, electric transit service to residents throughout the San Joaquin Valley, so we couldn't be prouder to share this milestone with them. At San Joaquin RTD, we see Proterra as an indispensable partner as we seek to improve air quality conditions in the Valley and to ensure that our riders have access to one of the most efficient, reliable mass transportation systems in the country."

"We're no longer at the dawn of the electric mass transportation revolution, we're in the midst of it, and this milestone delivery to RTD proves that Proterra continues to lead the way as the industry charges forward. As we deliver more buses, forge new partnerships and follow through on more repeat orders, we will continue to do our part as the North American market leader and will champion innovation throughout the electric mobility ecosystem."