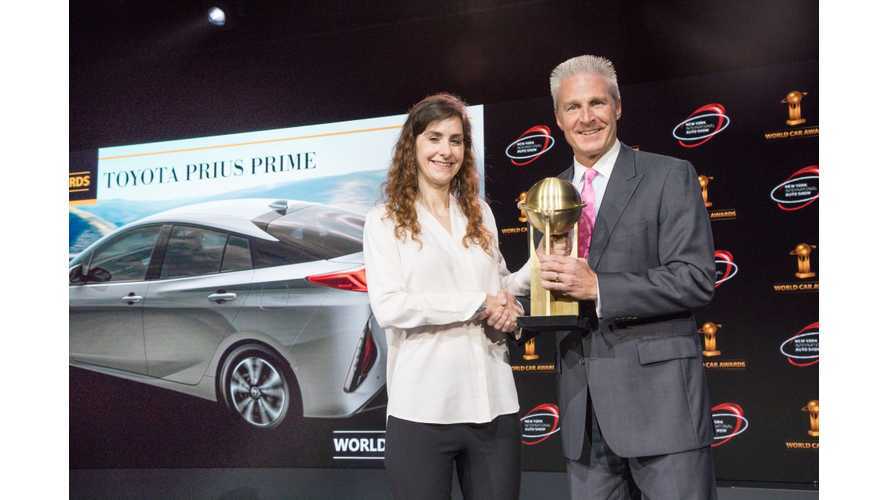 The Toyota Prius Prime earned the nod for the 2017 World Green Car title at the New York International Auto Show this week.

For Japanese manufacturer, it's the second title in a row, as year ago Toyota Mirai hydrogen fuel cell model was considered the best.

With less than 10 days worth of inventory, the Toyota Prius Prime still sold more than 1,600 copies in March. What is the ultimate sales ceiling for the plug-in Toyota?

The win by Prius Prime could be the right choice as initial sales results are pretty encouraging, although we have to say...we thought it would go to the Chevrolet Bolt EV, which has been sucking up awards like a Dyson vacuum cleaner lately.

"The Prius Prime was chosen from an initial entry list of 12 new vehicles from all over the world. Tailpipe emissions, fuel consumption, and use of a major advanced power plant technology (beyond engine componentry), aimed specifically at increasing the vehicle's environmental responsibility, were all taken into consideration.

Vehicles in all award categories are selected and voted on by an international jury panel comprising 75 top-level automotive journalists from 23 countries around the world."

"It is a great honor to see the Prius Prime named World Green Car. For global automakers like Toyota, this award is a testament to our focus on developing products that both stir the emotions and meet the mobility needs of our customers in all corners of the world."