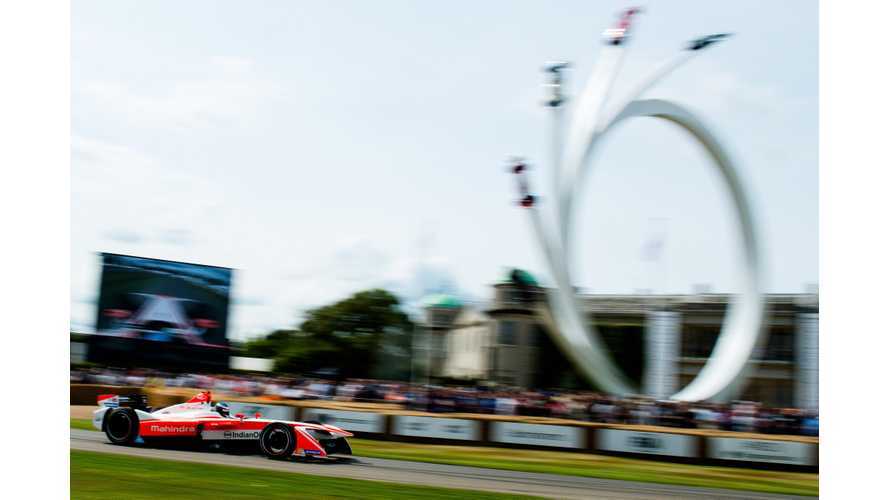 A new racer called the M4Electro showed up at the Goodwood Festival of Speed this past weekend, and it managed to snag a new record. Driven by Nick Heidfeld and built by Mahindra Racing, the M4Electro went up the hill in 48.59 seconds, a new record for an open-wheel electric vehicle on the stretch. Heidfeld owns the overall record for the hill climb with a 41.6-second time that he set in an  McLaren MP4/13 Formula One vehicle back in 1999. You can watch that performance below.

Mahindra will race the M4Electro in the 2017-2018 Formula E season, which starts at the end of this year.

3 July 2017, Oxford: Mahindra Racing flew the flag for the FIA Formula E Championship at the Goodwood Festival of Speed last weekend, setting a brand new open-wheel eRecord in the process.

Challenging convention, the team took the unprecedented step of debuting its brand new, as yet unraced, M4Electro in public for the first time. The car, with which the team will contest the 2017-18 Formula E season, raced up the famous Goodwood hill with Nick Heidfeld at the wheel.

Heidfeld, who holds the outright record on the hillclimb, set about laying a brand new electric benchmark. It was an ambitious challenge, but one that Mahindra Racing and the German driver tackled with confidence.

Running up the hill on each of the four days of the popular event, Heidfeld cut several seconds off his time on each attempt, culminating in his now-official record of 48.59 seconds, which was set on Sunday afternoon with all eyes on the M4Electro – at the event and online.

In addition to demonstration runs, the M4Electro competed in the final shoot out against a field of forty-two, which included a wide variety of cars ranging from the Le Mans GT winning Aston Martin, to Euro-NASCARs, and a Porsche 911 GTE Cup, ultimately setting the fifth-fastest lap.

In between the runs, the team's brand new M4Electro was present as part of the Sky Sports F1 pitlane showcase, offering ardent fans the opportunity to learn more about the Formula E Championship and Mahindra Racing's next generation challenger.

The Goodwood Festival of Speed is renowned for attracting the cutting edge of automotive brands, motorsport teams and drivers, past and present, but this was arguably the first time that a team had sent its future racecar up the legendary hill. The M4Electro will race for the first time later this year, when the 2017-18 FIA Formula E Championship gets underway, so it is an impressive feat for the car already to be a record-breaker.

Dilbagh Gill, Team Principal: "We really enjoyed our time at the Goodwood Festival of Speed. Not only have we unveiled the M4Electro to the public, but we have also challenged the sceptic's view of electric vehicles being neither fast nor exciting. It's been great to invite the fans to walk around the garage and ask as many questions as they like. To showcase the latest Mahindra Racing technology to such an incredible audience, both at Goodwood itself and through the online and social media coverage, was special. To then set a new open-wheel eRecord was the perfect conclusion to a wonderful event."

Nick Heidfeld: "I've been coming to the Goodwood Festival of Speed for many years, and it never fails to disappoint! The variety and volume of cars and people is always astonishing. It was great fun to drive up the hill with the target of setting a new electric single-seater record, which we managed to do – but I think we have to come back to challenge the outright electric record! It's positive to see that next season's drivetrain, which we showed here for the first time, ran problem-free. We haven't had many tests with it before so, all-in-all, it was a very good, productive and fun weekend."