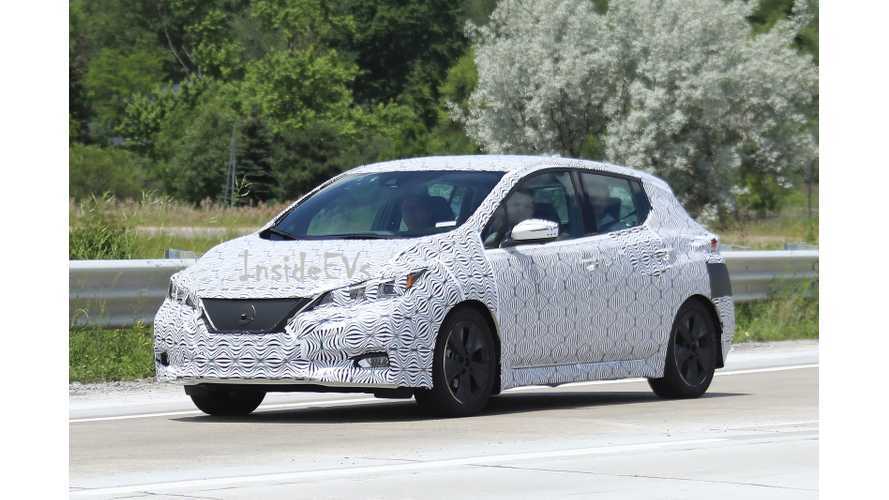 The pending arrival of the new 2018 Nissan LEAF has had little effect on current generation sales...thanks to some deep discounting!

For all intents and purposes, the current generation Nissan LEAF is the least expensive all-electric vehicle on the US market today (that is bigger than a bread basket), especially thanks to huge incentives (up to $10k off + $7,500 fed credit) being offered on the car ahead of the "new" LEAFs debut in Tokyo on September 5th.

Latest Nissan teaser for the 2018 LEAF

Heading into June that had lead to 8 consecutive months of sales gains for the 2017 model.

Looking ahead the great 2017 sell-a-thon looks to continue as production of the LEAF continued unabated in Smyrna, TN, and inventory of the car at local dealers actually increased throughout the month, and ends July with over 3,000 copies in stock.

Inside the 2018 Nissan LEAF (via Automedia)

Also of interest in June, InsideEVs caught the first images from inside the "new" LEAF (above) as the car was out testing mid-month - which in turn prompted Nissan to publish its own "teaser shot" of the new LEAF's dash just ~12 hours later.

Then last week, Nissan put out its third teaser image, this time of the LEAF;s front "faux grill".

The Nissan LEAF enters the second half of the year as America's 6th best selling plug-in, but we can't help but look ahead to the new LEAF's arrival and wonder what sales are in store for the EV in 2018.