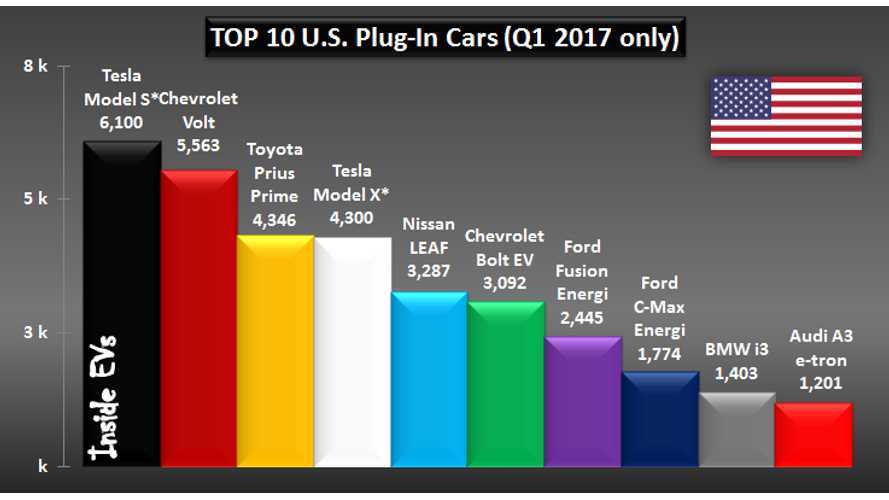 March plug-in vehicle sales in the U.S. brought some unexpectedly strong results, netting some ~18,107 deliveries for the month.  The achievement was the second best monthly result to date, and also provided a year-over-year growth rate of 30.7%.

Thanks to some difficult comparables from 2016 in March, the year-to-date numbers for the first quarter in America are even better:  40,729 sales, good for a growth rate of 46.3%.

The model-by model rankings (see chart below) have also brought some surprises so far this year.

After a March surge, the Tesla Model S is now the most popular model, followed by strong Chevrolet Volt.

Third best is now Toyota Prius Prime, which is showing more and more strength each successive month it is on the market, and may ultimately win the 2017 sales race once inventory arrives in depth.

A second Tesla, the Model X, has sold well enough to be fourth on the list, despite the highest price tag in the top ten.

Oldest in the rank, the Nissan LEAF has managed to still catch on inside the Top 5, besting the newcomer, Chevrolet Bolt EV, the last two months.  However, that will change soon, as we guarantee the Bolt EV has a bigger April and likely will top the sales charts, as GM's Orion plant has turned its focus back on producing and delivering US inventory to domestic dealers.

A full March sales recap, as well as individual model sales tally, can be found here.