Public Charging Stations Being Hit With Big Demand Charges, What To Do? 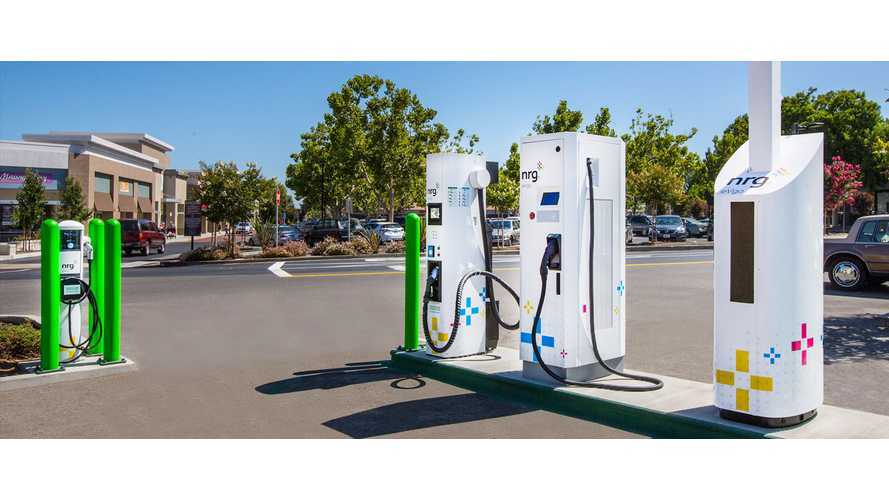 As it turns out, special charges based on the peak rate of electricity consumption in a month at certain time, are applied in addition to the cost of the electricity itself, and in some cases could exceed even 90% of total electricity costs overall, which make recharging much more expensive for the operator of the station, and ultimately the consumer.

For charging station owners, the high costs also strain the business models and profitability of the business, which leads to less infrastructure overall.

The Rocky Mountain Institute's study is based on data from 230 EVgo charging stations (2016) located in California.

When chargers power outputs move from the 50 kW standard of today, to 150 kW or even 300 kW, the problem will get even bigger.

Hopefully, decisions like that will come into force making charging business more viable.

The full report is below, and while it doesn't touch on energy storage solutions specifically (we imagine the report's primary goal was to deal with/pressure grid power providers), the concept to use on-site battery storage to "peak shave" those high demand times also has a lot of merit that we are starting to see be utilized in some rare cases.

"Rocky Mountain Institute’s new study, EVgo Fleet and Tariff Analysis, examined every charging session in 2016 on all 230 of charging-infrastructure provider EVgo’s 50-kW DC fast-charging stations in California. The study showed that demand charges can be responsible for over 90 percent of a charging station’s electricity costs, depending on the tariff and the extent to which the charger is used (its utilization rate). Demand charges are especially challenging to new charging infrastructure that has not yet reached a sustainable utilization rate. This issue will be compounded by the deployment of next-generation fast-charging stations, which will feature higher-power DCFC (150kW or higher).

A sample monthly load profile is shown in Figure 1. It shows the energy sold per month (measured in kWh) and the monthly peak demand (measured in kW) for a DCFC located in Northern California. It demonstrates a large (up to 70 percent) variation in energy sales from month to month, and a relatively small (16 percent) variation in peak demand each month. This type of variation suggests a potentially unprofitable charging station, because the commercial electricity tariffs that these chargers are on will typically derive a significant portion of the bill from monthly demand charges (where the variation was small) while the revenue would primarily derive from the number of charging sessions and kWh consumed (where the variation was large)."

"This disconnect between revenues and costs will not lead to a healthy ecosystem of vehicles and charging infrastructure. We’ll need something better if we are to achieve the societal objective of vehicle electrification.

EVs have only recently become a sufficiently significant type of load to warrant special tariffs, and so there is not yet an established practice for EV rate design, especially for public fast charging. However, in light of expected growth in EV ownership, unique charging attributes of EVs, and resulting effects on electricity demand, attention is now being paid to designing rates for EVs.

Tom Moloughney checks out ChargePoints new 400 kW charger hotness at CES in Las Vegas In January. A unit that is sure to take peak demand charges to another level in California and elsewhere around the world.

Traditional demand charges were designed for small-to-medium commercial customers and industrial customers, not public fast-chargers. Operators of these chargers have little control over when customers use them, and the chargers have widely varying utilization rates in widely varying locations and site types. In short, these charger networks look and behave nothing like a large commercial or industrial facility, but they are being billed as if each location is a separate commercial facility. Demand charges tend to shift system capacity costs onto customers with peaky demand profiles, and put an undue cost burden on those who may happen to have very brief and occasional demand spikes, like DCFC owners. To avoid such a cost-shift, system capacity costs should be recovered via energy sales, not separate demand-based charges.

For tariffs that apply to public DCFC, demand charges for distribution circuit and upstream costs should be deemphasized—or better, eliminated. If demand charges must be a feature of tariffs for EVs, then those charges should be time-varying and reflect actual system costs at a given time, in keeping with the principle of sending accurate price signals based on marginal costs. Customer-specific demand costs, such as the transformer and service drop, can be recovered via a fixed fee, but the circuit costs should not; those should be recovered via a time-of-use (ToU) rate for energy, to assure that sporadic-demand customers who can share capacity get the cost-saving benefits of that sharing.

In order to promote a business environment conducive to public DCFC charging stations, electricity tariffs for such stations should have the following characteristics:

Our analysis shows that reducing or eliminating demand charges for the commercial public DCFC market is consistent with good rate-design principles and helps to achieve the societal objective of widespread vehicle electrification. Recovering nearly all utility costs for generation, transmission, and distribution through volumetric rates is appropriate for tariffs that apply to public DCFC. Indeed, these tariffs need not even recover all costs that the system incurs to support these chargers. Some portion of those costs could be justifiably recovered from the general customer base, because public DCFC provide a public good in the form of reduced air pollution and other local economic benefits.

We should recognize that creating a business opportunity for companies that provide public EV charging services is a societal objective, in the same sense that it has been a societal objective to provide drivers with access to gasoline refueling stations. These companies should be able to earn a reasonable profit by providing a valuable service and maintaining universally available charging equipment in serviceable condition. That is not currently the case.

To take an alternative approach to achieving this objective directly, we could design a tariff by working down from a cost that will be attractive to EV drivers, rather than by building up from the cost basis of the utilities. From that consumer cost target, one could deduct a reasonable profit margin for the charging companies, and then set the result as the cost ceiling for a tariff that applies to public DCFC owners. Whatever missing revenue there may be between the revenue potential of that tariff and what is deemed to be the actual cost of service could be recovered from the general customer base on a cost (not cost-plus) basis only, to reflect the fact that there are numerous EV-to-grid value streams that remain to be recognized in the tariffs, including the nebulous, yet real, value of enabling greater renewable energy penetration. As RMI elucidated in its 2016 report Electric Vehicles as Distributed Energy Resources, and as both San Diego Gas & Electric and Southern California Edison have acknowledged and piloted to various degrees, what we should be aiming for is a future in which EVSEs doing “smart charging” can supply a variety of services back to the grid, in addition to consuming energy from the grid.

Should the state of the art in EV rate design evolve and make it possible to quantify and compensate the various value streams in the EV-grid interaction more discretely, a more sophisticated approach to EV tariffs could be devised. But at present, given the great importance of the societal goals embodied in the hopes for much faster EV adoption, the emerging nature of the underlying EV and telematics technologies, and the difficulty of the existing tariff regime for DCFC owners, a tariff meeting the criteria we have identified here can strike an appropriate balance between the theory and the practice of EV rate design, while supporting established policy objectives and design principles."