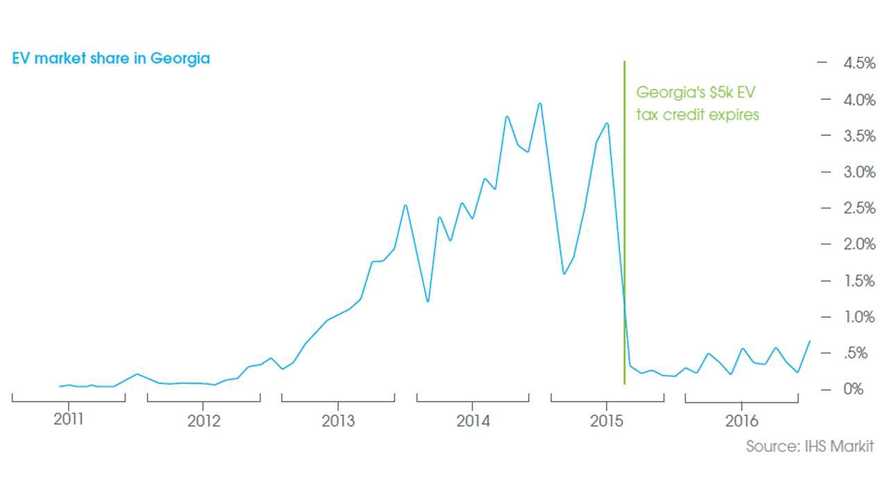 The elimination of the US federal tax credit ($7,500) is likely to kill the U.S. plug-in vehicle market - at least according to report released by Edmunds...which is slightly in contrast to a story we ran earlier today stating that all new vehicle sales in 2025 will be electric.

Apparently, there is no happy consensus...so why not present the other extreme end of the spectrum, and readers can decide for themselves?

Edmunds study primarily refers to the Georgia $5,000 state rebate, eliminated in July 2015, to foreshadow the coming doom; the loss of the rebate caused a significant drop in EV sales for the state.

The hit was especially hard for cars like Nissan LEAF, as more luxury models (Tesla Model S, BMW i3) were less susceptible from the loss of subsidies, and bounced back to normal levels.

Editor's Note:  an ongoing 2% market share statistically isn't that bad at all (its a little encouraging if anything) considering the regionality/trends of Georgia, and the loss of the credit to expected demand...and perhaps proves that a high volume of EVs put on the roads via incentive, does indeed encourage adoption once that incentive is removed - ie) the "butts-in-the-seats"/family & friends method of selling

Today's $7,500 federal credit is set for the first 200,000 sold cars per manufacturer, and will start fading in less than two years for the major players.

So, do we buy into the Edmunds report?  No, we do not...at least not to the extent it will "kill" the segment.

Would the loss of the federal credit hurt sales in the short term? Yes, for certainly.

Will there be a death involved?  Not hardly.

However, the part we really don't like is the basis of the report being focused on Georgia as a case study, because in doing so, the report is being either:

A) very disingenuous, or, B) very ignorant of obvious fact

...and neither are a good thing.  It's fear mongering.

The $5,000 George rebate was a holdover from a previous era (one the state could not act fast enough to get rid of), because when that rebate was used in conjunction with the $7,500 federal credit inside a lease, it made any car sold around ~$25,000 effectively free, and cars like the LEAF lease for about $99/month or less.

So, the Georgia market didn't fall apart when the rebate was taken away, but rather it merely was stopped from being unintentionally hyper-inflated, and the virtual "everyone gets a free EV promotion went away".  One day you can pick up a brand new EV basically for nothing or $99...then the next day its normalized with the rest of the nation at $250-$300/month.

It is pretty obvious to even persons with no knowledge of the EV segment that Georgia shouldn't being selling 17% of the America's anything, let alone electric cars.