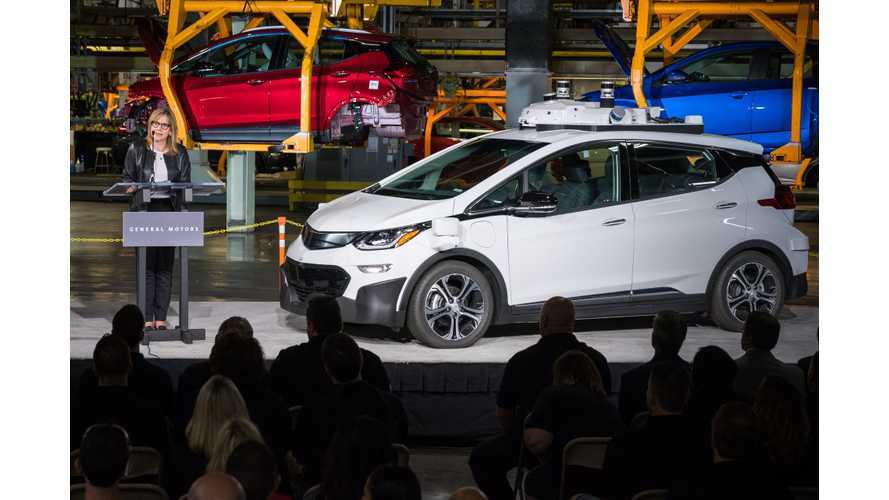 General Motors announces Tuesday, June 13, 2017, the company has completed production of 130 Chevrolet Bolt EV test vehicles equipped with its next generation of self-driving technology at its Orion Assembly Plant in Orion Township, Michigan.

As the Chevrolet Bolt EV reaches more and more US states, and as inventory deepens in those states, sales have, not unexpectedly, risen.  However, not at the rate we would have hoped.

For the year, 7,592 Bolts have now been sold, making the Chevy the 5th best selling plug-in for the US.

With that said, GM has clearly overshot its demand estimate for the Bolt EV in the early release/CARB-tastic states, and is now approaching 6,000 odd units in dealer stock (frustrating the rest of the world and the 36 other states who are still looking for any supply at all).

To that end, GM bumped up its nationwide delivery timelines, and started taking orders US-wide on June 1st, with the first deliveries to those states expected in early August.

How will the rest of the country, starved for wider, more capable EV offerings take to the Bolt EV?  Pretty strongly we imagine.  We would not be shocked to see 4 digit numbers starting with a "3" by the time the kids go back to school in September.

As for "end of model year" madness...there isn't any. With the late start to the 2017 model year, GM won't be kicking of 2018 Bolt EV production in Orion until December 18th, 2017.  No changes of significance are expected.

We should note that the Bolt did manage outsell the "other" new volume plug-in offering to hit the market for the first time the year - the Toyota Prius Prime, which sold some 1,619.  We should also note that the average inventory of the Prime on US dealer lots in the US was about 1/10th that of the Chevy however (averaging a little under 700 units by our estimates).

Video (below): Check out 1 of 130 autonomous Chevy Bolt EVs getting assembled in Orion, Michigan in June (more details here)

As for the Chevrolet Volt, it enters its 79th month of availability on the US market (now in 2nd generation trim), and as one might expect...it has just about found its level.

However, we should note that this month's result was off 10% from a year ago (1,937) - dropping the Volt out of the #1 best selling plug-in spot in America after 6 months (just behind the Tesla Model S).

Next month, the comps get even harder, with 2,406 sold in July of 2016. Hopefully GM has its selling shoes on, to both best the month, and to retake the overall sales lead in the US.

2018 model year production kicks off in Hamtramck, Michigan on July 10th, 2017 - and is mostly unchanged/uneventful (full details), that is unless your favorite color is "Green Mist Metallic"...if so, then this is your lucky day!  If you like a leather-wrapped steering wheel, it'll cost you $460 more.

Despite the 2018 model year so close upon us, the amount of 2017 Volt inventory is still near a 2nd generational high at almost 4,500 units - which makes us believe there is going to be some sharp deals from GM on the 53 mile extended range car this Summer!