ChargePoint Adds Former GM CEO Rick Wagoner To Its Board 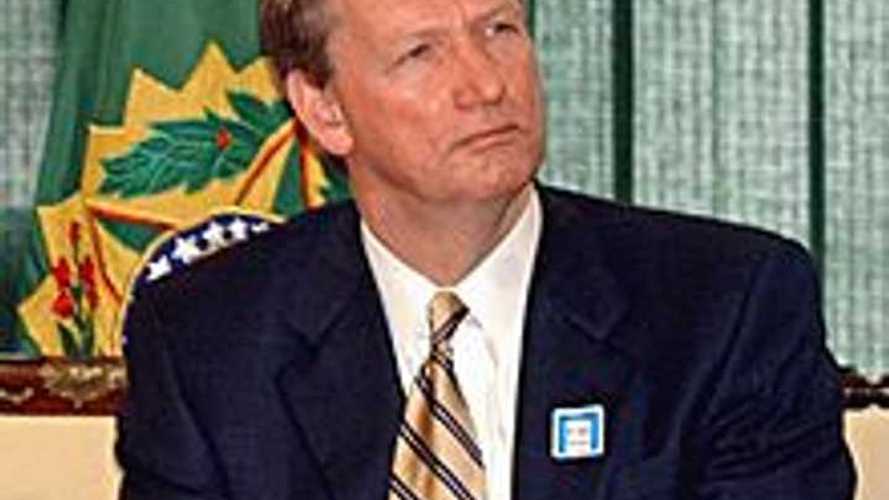 GM Product Boss Bob Lutz And CEO Rick Wagoner Congratulate Each Other On The Chevrolet Volt Concept's Launch A 1,000 Year's Ago

ChargePoint has appointed former General Motors CEO, and the man who green-lite the Chevrolet Volt, Rick Wagoner to its Board of Directors.

The largest charging network provider is currently approaching 25 million charging sessions and some 200 GWh of energy dispensed, via about 34,000 charging stations (including 500 DC fast chargers).

ChargePoint is also gearing up for the introduction of its next generation 400 kW Express Plus chargers (read InsideEVs' own Tom Moloughney's interview with ChargePoint on the topic of 400 kW uber-charging here).

The addition of Rick Wagoner to the board suggests that even broader expansion plans are in store for the charging network, and require Rick's even closer association with major automakers.

Says ChargePoint on the hire:

"ChargePoint, the world’s largest electric vehicle (EV) charging network, today announced the appointment of Rick Wagoner to its Board of Directors. Wagoner is an automotive industry leader, having held various management positions at General Motors (GM) around the world for more than three decades.

He became the youngest president and chief executive officer (CEO) in GM’s history in 2000 and was appointed to chairman and CEO in 2003, tasked with addressing several long-term challenges while creating new growth opportunities. Wagoner brings deep automotive industry and business expertise to the ChargePoint board, coupled with an acute awareness of the importance of e-mobility in the future of transportation."

"Wagoner is an advisor to and investor in a number of startups and early stage companies, including several in the automotive space. He currently serves on the Board of Directors of Graham Holdings, Invesco and Aleris Corporation. Recently, Wagoner served as chairman of Dematic Holdings and a director at Rivian Automotive, among other appointments.

In addition to actively participating in many boards and advisory positions, he is an honorary member of the Mayor of Shanghai’s International Business Leaders Advisory Council and formerly served as a member of The Business Roundtable and The Business Council.

Wagoner is a graduate of Duke University and received an MBA from Harvard Business School."

“Rick brings decades of expertise from the automotive business to the ChargePoint board, having led one of the world’s largest companies. He has accumulated a deep level of industry experience overseeing the development of some of the most iconic automotive products while tackling big challenges in business. This, along with his knowledge of large, complex ecosystems, makes him a valuable asset to the ChargePoint team as we continue our mission to make it possible for everyone to drive electric.”

ChargePoint Express Plus (shown in "available" and "in use" modes)

While Wagoner himself added:

“I’ve been a student of the auto industry for more than four decades and I’m excited to see it at the threshold of its largest transformation since its founding. The time for electric mobility has finally arrived, the important drivers of EV growth currently coming together and it’s clear that charging infrastructure will be one of the key factors in the success and growth of EVs. I’m eager to work with ChargePoint as the company continues to develop charging solutions to support the significant growth of the electric vehicle market.”

Can a tie-up, or closer association with General Motors be far behind?