Tesla Model 3 "Release Candidate" Caught In High-Res, In Blue Too 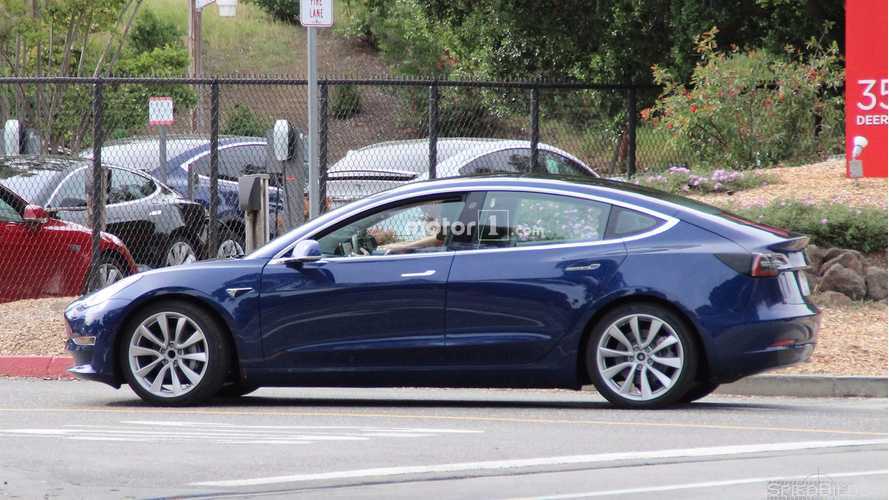 A "release candidate" Tesla Model 3... oh wait a second here, do we spy a blue one too!

A couple of Tesla Model 3 "release candidates" have finally been caught in Tesla's backyard in high-resolution thanks to our spy photographers.

We we're getting rather annoyed by the low-res videos and poor images of the 3 sightings in recent days, so we sent a pro photog out to capture the Model 3 in all its glory.

The result is the crisper, cleaner images what you see here...

As we've recently learned, the Tesla Model 3 will come with up to 10 cameras for Autopilot.

There was some speculation that the trunk opening on the newer Model 3s has been altered to allow for larger items to fit, but that doesn't seem to be the case in these photos.

To our eyes, the pair of 3s seen here look incredibly similar to the prototypes from the reveal. Yes, there are a few slight alterations, like those cameras here and there and possibly some slight front-end tweaking, but not much else appears to have changed from prototype to what we see here.

Additionally, the first Model 3s to be delivered will all be rear-wheel-drive examples. The dual-motor, AWD 3s might just make it into the hands of buyers by the end of 2017.

As for range, Tesla CEO Elon Musk made a few recent comments on that topic as well. According to Musk, the maximum battery capacity for the Model 3 will be 75 kWh. That pack will provide the 3 with more electric range than the 238-mile Chevrolet Bolt.

There's been some recent, rather heated discussion on topic of HUD and a central-to-driver speedometer in the Model 3 too.

The Tesla Model 3 is expected to enter production this July with volume deliveries coming perhaps as soon as September.

Full pricing details should be announced on or around June 2, which is our guesstimate date for Part 3 of the Model 3 reveal.

After the Model 3, Tesla focus will turn to the Model Y electric crossover based on the same platform as the 3. But it's the Model 3 that is of utmost importance right now and Tesla's success or failure almost surely hinges on the automaker's promise to deliver the 3 on time at or around the $35,000 price point promised by Elon Musk some years back.