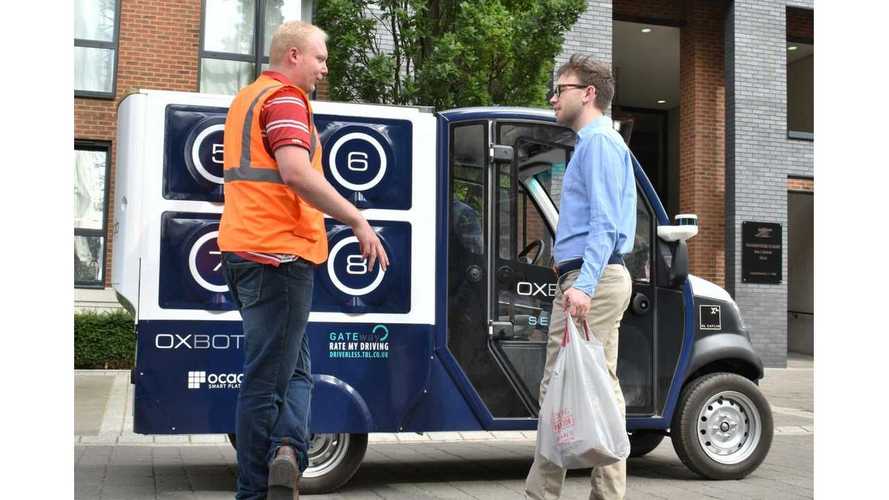 If you're shopping at a grocery store that exists only online, you're not going to be able to put some brown paper bags full of cabbage in the trunk and drive home. Usually, if you're shopping online, you'd expect a driver to pull up to your door and hand you your precious kohrabi. But for some shoppers in the UK, there won't be a driver at all.  Just a self-driving electric vehicle called the CargoPod. Think of it as a Starship robot with more room.

One CargoPod is about to start a pilot project in the the Borough of Greenwich near the London City Airport.

GATEway Project and Ocado Technology (a division of Ocado, the world's largest online-only supermarket) are partnering up to test the AI-driven EV, which will be made available to 100+ customers in the Berkeley Homes, Royal Arsenal Riverside development.

As you might guess from the capital letters, the GATEway Project has a bigger name. It's the Greenwich Automated Transport Environment (way?) Project, and it focuses its effort on the so-called "last-mile" issue. This is usually used in reference to getting people where they want to go, but the subway/street car/whatever doesn't get them right to the door. So, for the "last mile," instead of walking, people can quick rent a bike or hire a little vehicle of some sort, usually autonomous. The CargoPod is a "zero emission, low noise transport system" that uses and AI called Selenium. The vehicle can carry up to 128 kilograms (282 pounds) at once.

If the CargoPod is a hit – both with shoppers and with people on the street that will have to interact with this thing – then Ocado might have a "wider roll out of autonomous vehicles which, in the future, may play an important role in cutting inner city congestion and air pollution."

Check out a GATEway video that outlines of the program below.