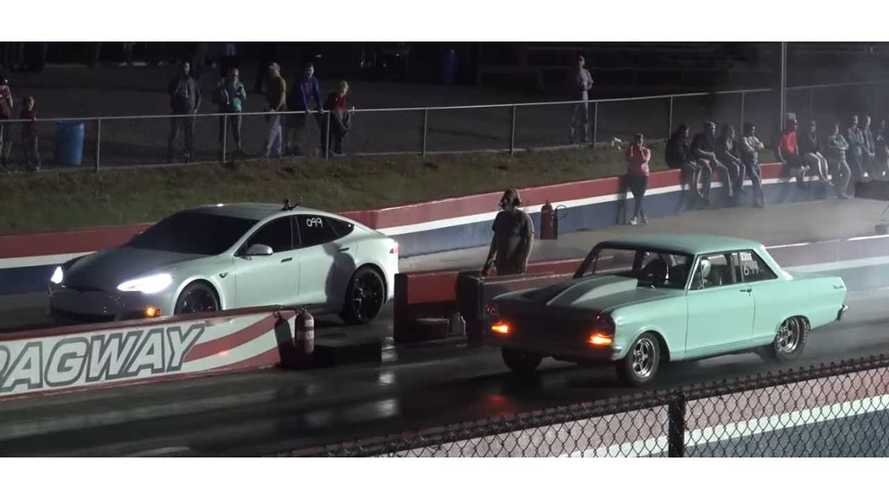 Tesla Racing Channel shows up to Farmington Dragway with a Model S P100D with aluminum front seats, and no rear seats, to take part in some drag racing.

The driver explains that the Tesla is a bit too fast for the 7.00 Index, which isn't necessarily a bad thing. However, the Model S is too slow for the 6.49 Index.

He's not engaging launch control, because he's working reaction time, and trying to get a consistent time over and over. Surprisingly, although the 6.49 Index is not his race, the Tesla wins, hands down. He comes off the line well behind the competitor, but the Model S has no issue overtaking.

In the first 7.00 Index, the Tesla blows away the competition, however, the race is called for a red light on the P100D.

The third race is a 6.49 Index, against a Twin Turbo Coyote Mustang ... Model S for the win.

In the fourth race, which is round two of the 7.00 Index, Tesla Racing Channel actually had to buy back in to continue competing, due to the previous red light loss. This one looks really rough for the Model S. The competitor jumps off the line and stays way ahead for the bulk of the race. It looks like a loss for the Tesla, but it's a split-second win.

Race number five sees the Model S get knocked out of the 6.49 Index with a loss in the third round. Not bad for a 6.49 Index.

The 7.00 Index Finals wrap up with the Model S facing a compact pickup truck. Despite another one that looks way too close to call, the Tesla pulls it off again.

Thanks to Wes Taylor w/ Lock_It_In_Productions for the Thumbnail! Bringing the Semi Gutted Tesla Model S P100D, which has had two lightweight aluminum kirkey seats installed along with no rear seats whatsoever, to Farmington Dragway and their BoostFab Championship Series where we run a few index Classes. One a little too fast for the tesla, 6.49 index and the other a 7.00 Index. Not using launch control due to trying to get a good, consistent reaction time everytime this P100D drag races through round after round in each competition class.