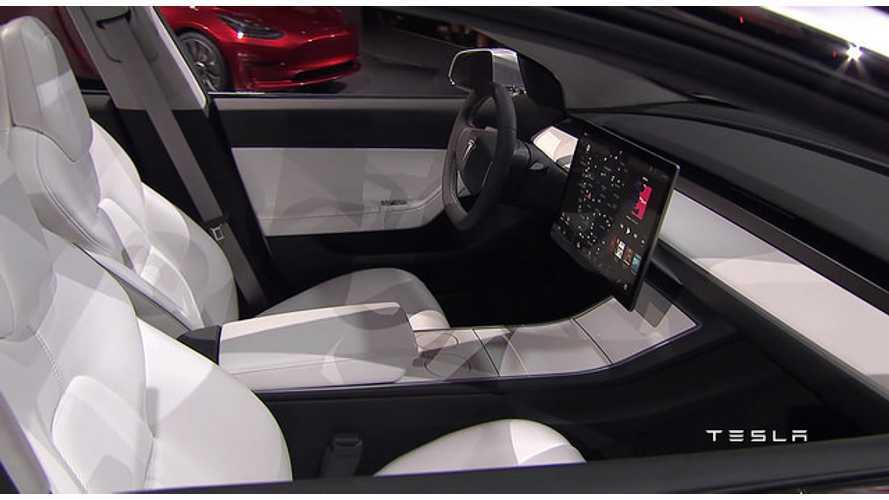 Upon detailed scrutiny, many more fine details about the Tesla Model 3 emerge.

Teslarati obtained some outstanding close-up shots of the Tesla Model 3 -- mostly the interior features -- and has provided some new details. The only exterior feature that was revealed in the new shots is a green, illuminated Tesla logo, which is exposed once the universal charging port door is opened. The Model 3 doesn't appear to have the illuminated ring associated with the Model S and X.

The pictures show a touchscreen icon, on the bottom right corner of the display, which Model3OwnersClub forum members believe will release the glove compartment door. There isn't likely any physical button on the glovebox.

As expected, there is very little in the way of physical buttons anywhere in the car. The inside door panels show two small switches; one for the window and one to open the door. Also, the typical small storage compartment is present at the bottom of each door.

Speaking of the sun visors, Tesla has opted to make them extra large in the Model 3. This makes perfect sense since people complained about too much sun exposure in the Model S and X. Complaints were more specifically targeted at the X's panoramic roof and large windshield, but the Model S all-glass roof option has also received mention.

Perhaps the least fascinating news, but the most exciting, is that unlike the Tesla Model S, the Model 3 appears to have a standard retractable coat hook. This is something that should be in every car, and especially in all luxury vehicles.

Check out the link below to see the detailed pictures yourself.