Porsche Attempts To Follow A Tesla, Does Donut Instead - Video 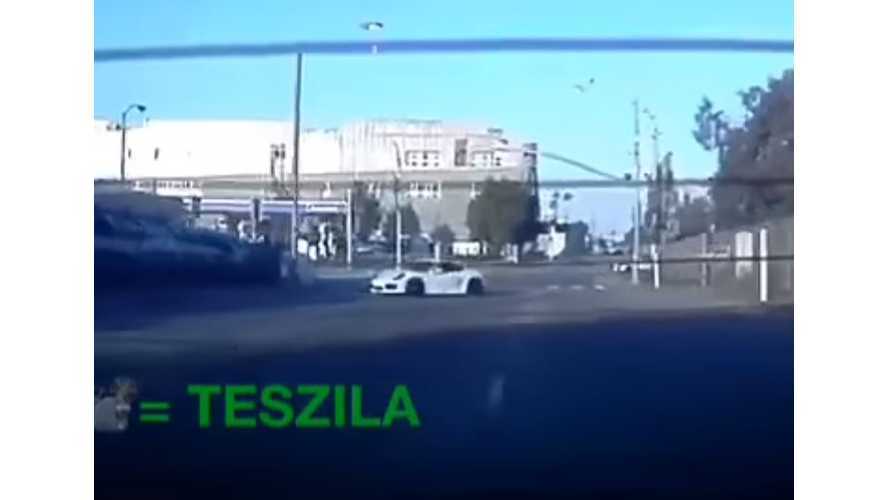 Porsche really needs that electrification push, in order to keep up with Tesla.

Despite the fact that the Tesla Model S is not a traditional sports car, and it wouldn't be able to succeed at the likes of Nürburgring, or surpass many rivals' top speed, it's still become the car to beat these days. This is due to the instant acceleration of the electric powertrain, along with the ridiculously intense Ludicrous Mode.

As you can see in the video, the Model S takes off quick, obviously with Ludicrous mode engaged, and a driver of a Porsche Cayman GT4 wants some action. The Porsche takes chase, but the Tesla is way ahead. The first corner comes up fast and the GT4 ends up spinning out.

The GT4 is a light and extremely nimble car. So, performing a donut is not a difficult task. However, the driver must need a few lessons in how to not lose control in this situation. The Tesla Model S, on the other hand, is very heavy. The weight is spread evenly throughout the bottom of the vehicle, due to the battery pack, so it has no problem sticking to the road.

Perhaps when Porsche brings its electric car to market - the Mission E, the Model S will finally have some worthy competition.

About the Mission E: Porsche's EV is said to pump out 600-plus HP, zip from 0 to 62 MPH in 3.5 seconds or less, and boast a top speed in excess of 155 MPH and have a range in the neighborhood of 300 miles. Production is tentatively set for 2019, as the Mission E now listed as “priority one” for the company.

Better still, there won't be an Aston Martin, or 918-like limited runs happening, annual production is now being tooled up to deliver 60,000 per year.