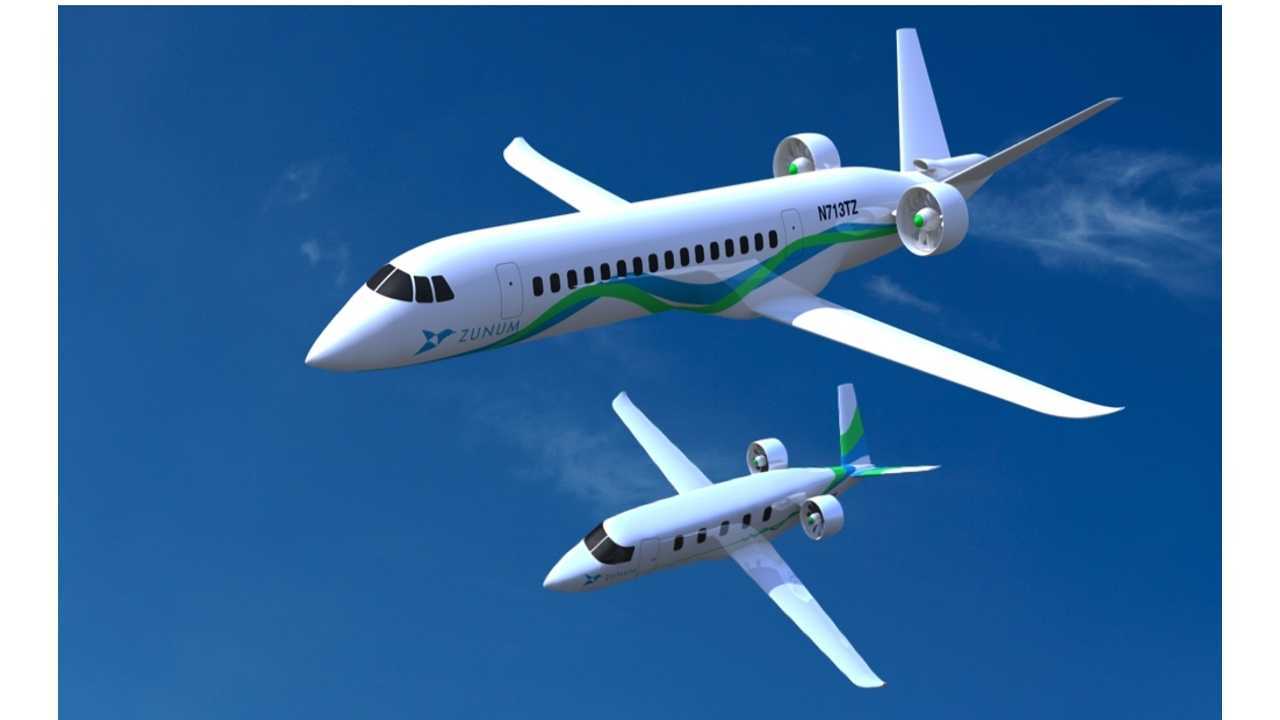 Boeing and JetBlue Technology Ventures have placed a bet on Zunum Aero's hybrid-electric aircraft, plans that promise to offer both fast and more affordable travel.

The airplanes' propulsion systems are to be series hybrids, with some small all-electric mode that we believe are mostly utilized for take off and landings in silence.

Beside an improved fuel economy, lower emissions and quieter operation, the Zunum Aero planes could be accommodated by smaller airports, which could be a nice niche ("over 5,000 underutilized regional and general aviation airports") for the brand.

Zunum Aero Developing Hybrid-Electric Aircraft for Fast and Affordable Travel Up To 1,000 Miles

SEATTLE--(BUSINESS WIRE)--Zunum Aero, a pioneer in electric aviation, is developing regional hybrid-electric aircraft for the early 2020s, offering unmatched door-to-door speeds and reduced costs for flights from 700 miles at launch, to over 1,000 miles by 2030. Zunum Aero aircraft are designed to take aviation into the future: enabling frequent service to the nation’s network of over 5,000 underutilized regional and general aviation airports. These 10 - 50 seat aircraft will pave the way to a golden era of fast and affordable electric air travel, reversing the 70 year consolidation of air services. Zunum Aero is backed by Boeing (NYSE: BA) and JetBlue Technology Ventures, a subsidiary of JetBlue Airways (NASDAQ: JBLU); both believe that regional travel is ripe for transformation.

"The shift of the industry to large aircraft and long ranges driven by gas turbines has concentrated almost all air traffic to just two percent of our airports, creating a massive transport gap over regional distances where there is no high-speed alternative. As a result, door-to-door times for most journeys are no better than they were 50 years ago," said Ashish Kumar, CEO and founder, Zunum Aero. "Hybrid propulsion is an industry-changing solution, enabling mid-sized aircraft on regional routes to have better cost efficiencies than airliners.”

By shifting traffic from hubs to regional airports, Zunum Aero is democratizing access to fast and affordable travel. Designing aircraft for walk-on, walk-off travel from nearby airports addresses the major pain points of modern air transit while filling a vast regional transport gap. For example, passengers can expect to travel from regional airports in the Boston area to Washington, DC for half the fare and in half the time it takes today door-to-door. For those on the West Coast, Silicon Valley to the LA area drops to two and a half hours door-to-door, from over five hours today, or to Lake Tahoe in just two hours at a fraction of today’s cost. Additional estimates of impact include:

Zunum Aero is three years into development with an experienced, multidisciplinary team across aircraft, aircraft engines and electric vehicle disciplines, including leaders of two flying electric vehicle programs and the leader of a NASA-funded program on drives for electric airliners.

In addition to backing by Boeing through its Boeing HorizonX innovation cell and JetBlue Technology Ventures, Zunum has a long-term partnership with the Center for Power Optimization of Electro-Thermal Systems, an NSF Engineering Research Center at the University of Illinois, and a network of collaborators across leading Universities and government labs. The team has also been actively engaged with the FAA since 2014 to drive development of certification standards for electric aircraft. A complete set of standards for electric aircraft are expected by 2018, and the first electrics are likely to certify in 2020, in time for the first Zunum aircraft to roll off a production line.

“Boeing HorizonX is investing in Zunum because we feel its technology development is leading this emerging and exciting hybrid-electric market space. This technology and customer approach has the potential to transform the market for small, short-haul aircraft that can use smaller regional airports,” said Steve Nordlund, Vice President, Boeing HorizonX.

“At JetBlue Technology Ventures, our goal is to be part of a disruptive force rather than the one being disrupted and we seek new technologies that look to change the game,” said Bonny Simi, President, JetBlue Technology Ventures. “As a company that is also deeply committed to innovation in sustainable travel, we believe that Zunum and its quiet, environmentally-friendly aircraft will light up a vast network of underutilized airports and reinvent regional travel.”