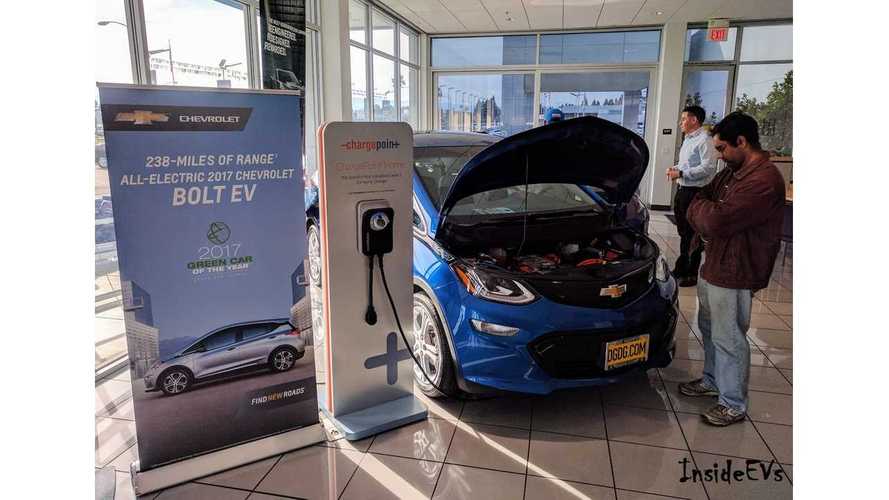 Up against some particularly difficult sales comps a year ago, March 2017 was the one month that there might have been a hiccup in the surging US plug-vehicle market.

Not only did the plug-in sales post year-over-year gains for the 18th consecutive month (or 1.5 years if you will), but March did it in style, with 22 different models touching 2017 highs.

With less than 10 days worth of inventory, the Toyota Prius Prime still sold more than 1,600 copies in March. What is the ultimate sales ceiling for the plug-in Toyota?

Putting another way, at the current pace of gains, the US market is heading for some 232,000 plug-in sales for 2017...and that is before adding in any future Model 3 numbers, projected by CEO Elon Musk to start limited production in July (and ending the year out at a ~5,000 per week pace), or 2nd generation LEAFs this Fall.

Not too shabby at all.

Getting to the individual results; as March was the end of a quarter, one can count on Tesla to focus its delivery efforts on the US.  And despite losing a week+ of production in February (affecting March deliveries) for Model 3 tooling, the company still managed to deliver and estimated 6,200 EVs for the month (~3,450 Model S, ~2,750 Model X).

The March surge for the Tesla Model S was enough to put it just ahead of the Chevrolet Volt in total sales for the year (by 537 units), but the Volt also outperformed expectations, selling 2,132 copies during the month.  We should note that not everything was rosy for GM, as the company cited issues getting Chevrolet Bolt EV inventory to dealers, which caused the 238 mile car to sell just under 1,000 copies for the second month in a row.

As it relates to the Bolt EV, but not for March, the inventory level of the car surged in the last days of the month, and only days into April reached a number close to 4,000 units (as possibly GM shifted attention from Ampera-E production for Europe back to the US).  The bottom line?  April says are going to be up...way up for the Bolt EV.

Chevy Bolt EV: Not-so-good results in March thanks to inventory issues. But with that situation resolved for April, we expect big, BIG things!

On the surprise side, the BMW i3, after floundering for what seems like an eternity, rebounded in March, selling 703 copies - up from 318 in February, and 111% better than last year (332 sales).  Hopefully this signals the imminent return of the plug-in BMW to former glory, with sales in the 4-digit range.  Also the BMW 330e finally got some inventory (only took a year) and notched 365 sales...clearly on the way to bigger and better results - finally.

But the biggest surprise of the month was definitely the Ford Focus Electric!  After 60 months in a row of selling 150 units (+/-99 copies), the new long ranger model finally arrived (115 miles - up from 76 via a 33.5 kWh battery), and with it - a sizable amount of customer orders that piled up over the past ~4 months.

Most models made new 2017 highs in March, a listing of which one can find under the model-by-model sales chart below.  (All-time, month-by-month, historical data for previous years can be found here)

Other Statistical Points of Interest from March 2017

Its the end of a quarter...so Tesla heads back to the top of the list!

The longer range Ford Focus Electric arriving in March...bringing with it a new, historically high, level of sales for the model