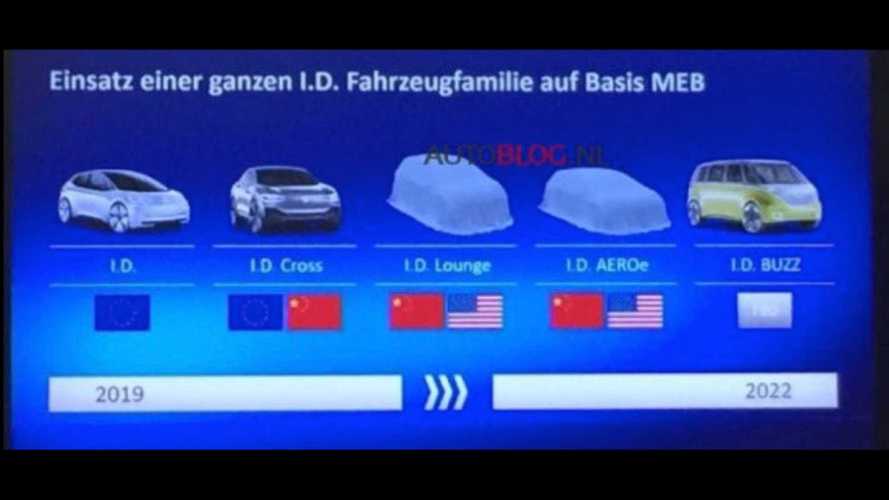 The I.D. Lounge and I.D. AEROe will both make their way to the U.S.

Fans have been waiting a long time for VW to revive its iconic microbus. Finally, it seems, the company is going to give everyone what they’ve been asking for; the electric I.D. Buzz concept will make its way to production in the next few years. But it won’t be the only I.D. concept heading for the dealerships in the near future.

Thanks to an image acquired by Groen7.nl, we now know that the I.D. Buzz will be joined by the handsome I.D. hatchback, the I.D. Cross SUV, the I.D. Lounge, and the I.D. AEROe – the latter of which looks like it could be a streamlined, sporty coupe.

The I.D. Lounge and AEROe will be sold in the U.S. and China exclusively. VW has partnered with JAC to produce hybrid and electric vehicles in the region. The I.D. Cross will be sold in Europe and China, while the I.D. hatchback will be limited to Europe. The I.D. Buzz (or microbus) is expected to make its way to the U.S., but the company doesn’t specify region in the leaked image.

Close Up (autoblog.nl via Groen7)

Part of the electric onslaught is thanks, in part, to lawsuits and penalties following Dieselgate. Apart from a $225 million fee, VW will be forced to launch three ZEVs in California by 2019. The I.D. range, along with a new e-Golf, will undoubtedly be the result of that.