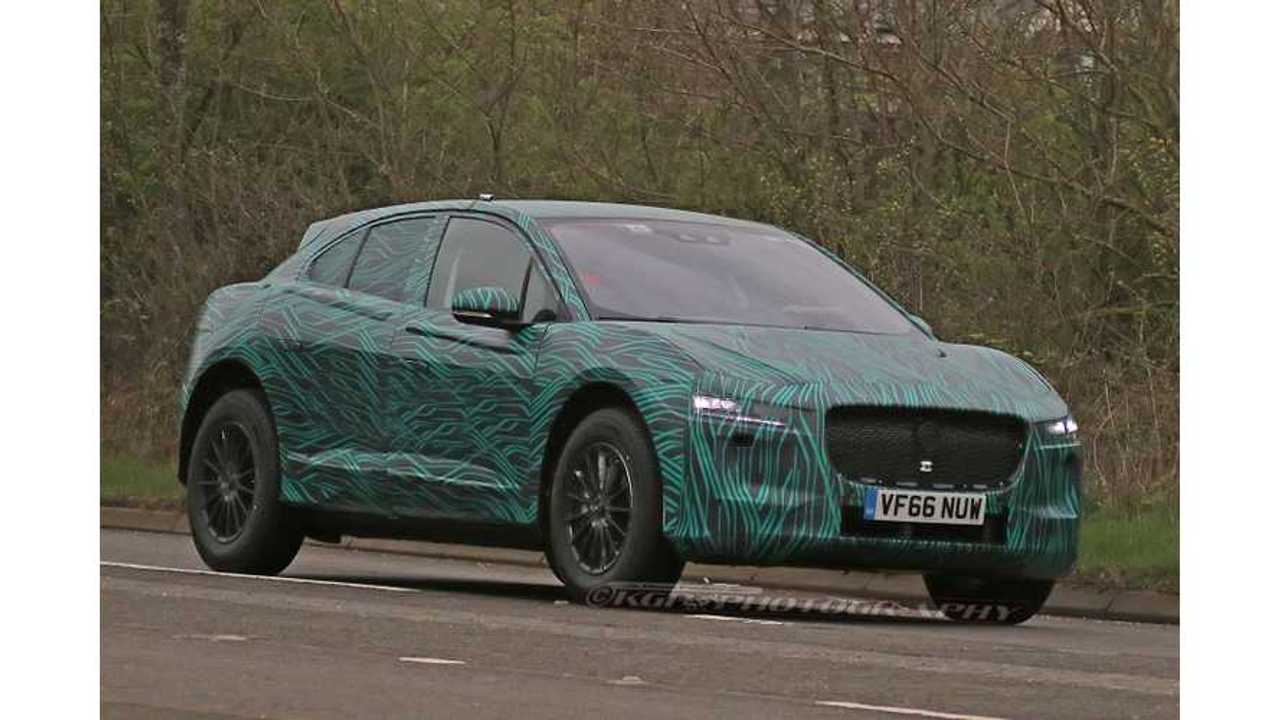 Jaguar has been stated that it will beat future competitors to market with its ~220 mile (90 kWh), all-electric I-Pace...and today's spyshots show a production-intent version of the CUV in Europe that underline Jag's commitment is real.

The I-Pace debuted just a few months ago from the Los Angeles Auto Show (our full gallery live from LA here), and more recently in "Photon Red" from Geneva (gallery).

The production prototype we spot on the road today is very similar to the original concept; which isn't surprising, as Jaguar stated the original show car  would be near identical in form and funtion to the production version.

Featuring a unique camouflage wrap, the I-Pace was caught testing in the UK this week.

Subtle changes include a slightly less aggressive front look, more "reality friendly" wheels, as well as a more manageable side glass design, and side support pillars.  While the fairly unique door handle design seems to be mostly retained.

Expected in the second half of 2018 as a 2019 model, the 90 kWh battery is supply by uber-supplier LG Chem.  Given how slippery the I-Pace is (.29 Cd), we think the estimate of 220 miles is well on the conservative side by the time the Jaguar gets its official EPA/real-world rating.

The all wheel drive EV will be actually be built by Magna-Steyr (in Austria) and puts out 400 hp and 516 lb-ft of torque (via two motors).

"Show" Wheels may not live to see production, while support between A and C Pillars Added

Some Quick Specs of Interest:

According to the company, the response to the I-Pace Concept was "fantastic", so Jaguar isn't keen to change much on the design heading to production. Design Director Ian Callum said in a statement (via WardsAuto):

“The feedback on the I-Pace Concept has been fantastic. With the I-Pace concept, we’ve torn up the rule book to create a vehicle with supercar-inspired aesthetics, sports-car performance and SUV space in one electric package.”

No pricing has yet been given on the Jaguar I-Pace, but it has been previously strongly hinted that its base price is targeted around that of the Tesla Model S sedan's entry MSRP, which at the time was about~$68,000 USD;  although the 60 kWh version of the Tesla will be discontinued in April (as long expected), making the new base price (S 75 RWD) $74,500.

Below: Some more photos of the I-Pace testing, as well as shots in "Photon Red" from Geneva, and a early test drive review of the I-Pace Concept from earlier this month.