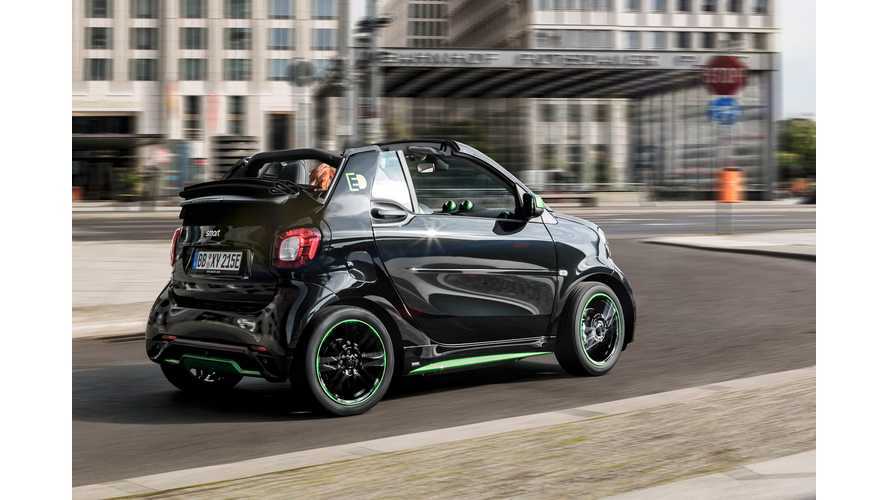 Following earlier rides in the standard smart fortwo and forfour electric drive, Autocar took the new fortwo cabrio electric drive for a spin (our own favorite inside the smart lineup).  Electric "Topless fun" ultimately received a rating of 4 out of 5 stars.

The positives for the open top smart were noted as being both great for city driving (and of course parking), as well as energy efficiency.

Overall, the new generation is deemed to be much better than the previous one, with some pretty decent acceleration bumps over the outgoing petrol versions.

The next gen is a little wider, has slightly more room inside, and the interior quality has been improved - including  a standard integrated TomTom infotainment system with a 7 inch touchscreen.

The new fortwo cabrio electric drive is one of those models that is better than conventional version (aren't they all?), but the range of 155 km/96 miles on the NEDC scale (think 80 miles/129 km EPA) and thus the necessity of frequent recharging, keeps the petrol model sticking around - at least in Europe anyway.  In the US, the petrol versions have all been discontinued for the 2018 model year.

"Along with its fixed-roof sibling, in some ways it is the ultimate city car – one that grows on you the more you live with it in an urban environment. With strong performance up to typical city speed limits and unparalleled manoeuvrability within tight confines, it is a city dweller‘s dream.

The downsides are that use of it requires easy access to an electricity supply for recharging, and that it can only seat two and take a limited amount of luggage. If you can live with this, it's the clear choice over the petrol-engined Fortwo Cabriolet, which lacks the sheer verve and inherent character of its new electric-powered sibling"