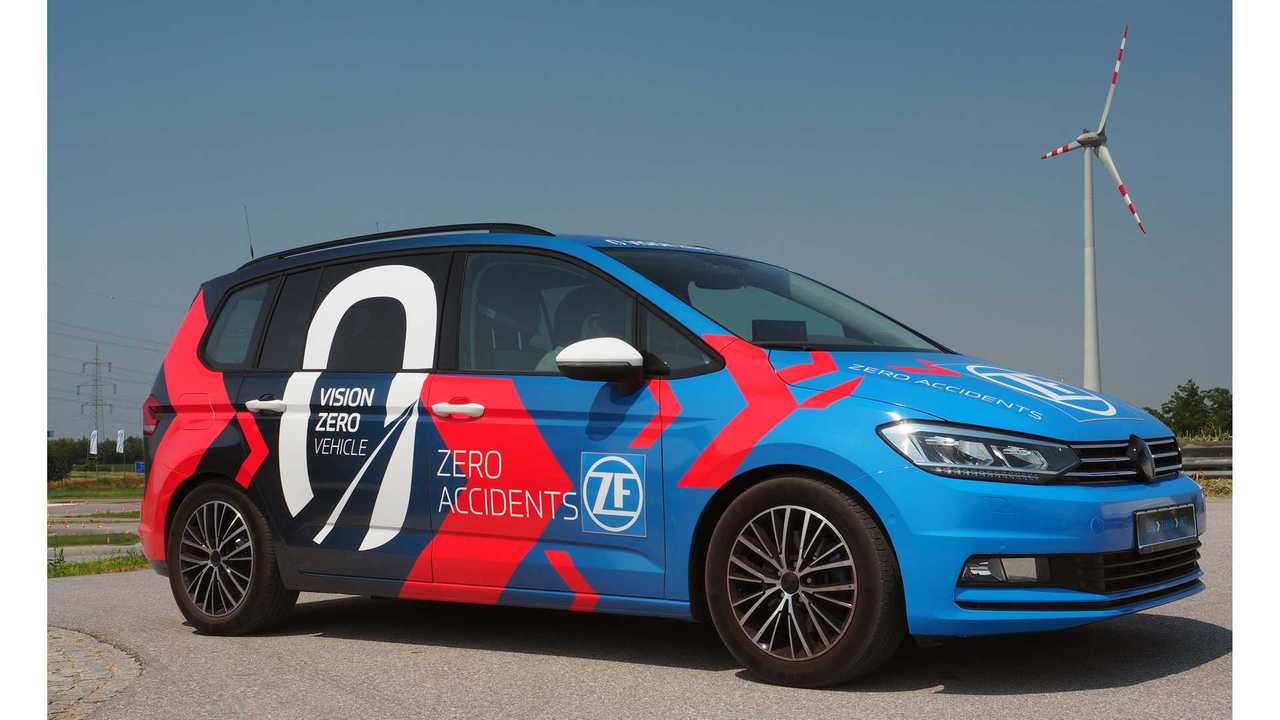 Tomorrow gets closer every day.

It takes a lot of work to build the future. In the automotive industry, much of that work is done by suppliers who you will probably never know worked on your new tech-splattered EV. That's one reason why supplier ZF invited journalists from around the world to a test track outside Vienna, Austria for a day of hands-on demos and test drives (well, mostly test rides) of the cars it is working on. These prototypes are previews of the connected and electric cars we'll be driving next year. Of maybe the year after that.

Maybe you know about the German company ZF, maybe you don't. But the big automakers sure do, and that's why the company had 136,000 employees and revenues of 35 billion euros last year (PDF). As ZF looks to the automotive horizon to try and figure out what parts and technology it needs to try and sell the OEMs, its main message is "Vision Zero." This encompasses both zero emissions and zero accidents, and the company's Vision Zero prototype vehicle, pictured here, embodies both definitions.

Every year, ZF whips up a marquee concept vehicle to showcase the things it is working on. Following the calendar of the two major vehicle shows in Germany, ZF makes a commercial vehicle concept in the even years for the IAA Commercial Vehicles Show, and in the odd years, it builds a passenger car concept for the Frankfurt Motor Show. Two years ago, we saw the Advanced Urban Vehicle. This year it's the Vision Zero Vehicle. A Volkswagen Touran MPV that has been completely modified under the hood, this concept carries a non-ZF battery pack up front, an electrified axle in the back, and more autonomous driving and safety tech than you will know what to do with. I went to Vienna to take a look and see what Vision Zero might tell us about upcoming plug-in vehicles.

Let's start with the autonomous and safety tech, because EVs are going to get more and more connected. The Vision Zero keeps an unsleeping eye on the driver, to make sure she is always paying attention to the task at hand. Sure, the car can drive itself back to the middle of the lane (in certain circumstances, anyway), but if the camera – which looks at the driver's whole face, not just the eyes – notices distraction, the car will briefly tighten its smart seat belts and beep at the driver before taking over and stopping the vehicle. The vehicle decides when to take control of the situation based on vehicle speed and outside conditions like traffic. The VZ can also tell if you try to drive it the wrong way on a highway on ramp, and will completely shut down any forward progress if you keep on trying to do that. Another prototype safety system, not installed on the VZ, was able to automatically swerve away from hitting a parked "car" without the driver having to touch anything. I've got video to prove it:

Gerhard Gumpoltsberger, head of innovation management at ZF, said he thinks Level 4/5 auto driving (i.e., when a driver doesn't actually have to drive) can technically be accomplished without lidar (see also: Tesla), but said he's convinced that the first level 4 vehicles will have three sensor types: radar, lidar, and cameras. The whole industry is trying to figure out which sensor suite works best, and how they cost, and how much redundancy there needs to be. Once someone introduces a real level 4 vehicle, he said, everyone else will look to see how they did it. There is no lidar system in the Vision Zero, because ZF is not yet ready to show what it is doing with lidar to the press.

That leaves cameras and radar in the VZ, as well as a cloud connection. The cloud will be used to do many things, but one example is that if one vehicle notices a pot hole, it can send that information to the cloud, so that other vehicles traveling down that road later with know that it is there, and be able to avoid it. Every day, the VZ vehicle generates 12 Terabytes of data like this, which leads to another huge area of concern. Right now, ZF doesn't collect all of this data (that's just how much data is flowing through the system) but anything that gets generated can be hacked. Given privacy and security concerns, ZF might some day support rules requiring a third party to step in between the data that gets collected and the way it is used by the cloud. Just like with lidar, a big question the industry is asking now is who will be first to figure out how the different automakers can collect and safely share useful data, and who will set the standard?

Now, about the electric powertrain components. The battery in the Vision Zero was purchased from a supplier that ZF has worked with in the past (no one would tell us which one). Despite a recent spate of acquisitions and partnerships to broaden its capabilities beyond its traditional transmission business, ZF has absolutely no plans to ever make a battery. Instead, it wants to have a finger in every part of the powertrain between the battery and the wheels. In the Vision Zero and any possible production vehicles that use the technologies seen in it, that means thee motor, the control software, and a single-speed transmission, among other things. For electric passenger cars, ZF still believes that you don't need multispeed transmissions, and as motors get better, any potential need for multi-speed transmissions drops even further. Sports cars and heavy vehicles remain likely exceptions to this rule.

There's already a lot of ZF technology hidden inside some of today's electric vehicles, from the 8-speed dual-clutch plug-in hybrid transmission used in the Porsche Panamera, Audi Q7, and BMW X5 PHEVs to the gearshift and steering wheel systems in the VW Golf GTE. If the automotive supplier gets its way, a lot more plug-in vehicles will be using ZF components in the very near future, including the powertrain highlight of the Vision Zero, the mSTARS axle.

That somewhat odd acronym stands for modular Semi-Trailing Arm Rear Suspension, and it's a rear axle with an electric motor built in. Thomas Wenzel, director of external communications for ZF, called it a "turnkey solution" for any automaker who wants to add electric drive to their vehicle, whether its a hybrid, PHEV, or EV. The mSTARS is not destined for any particular OEM vehicle just yet, but from its position on display next to ZF components that are headed to production EVs soon, we suspect it won't be long before someone chooses this compact option for their EV, likely in a higher-end vehicle. ZF's Michael Wetzel said that his company has had discussions with "many customers" and pointed out that the whole unit could be attractive to a non-automotive OEM like Apple or Google or maybe even Faraday.

The mSTARS unit was sitting out next to a small electric vehicle drive unit that Wetzel said will be used in a new production electric vehicle starting in 2018 – coming first to Europe and then the U.S. and China – as well as an integrated starter motor, which will be going into production for an OEM in 2019, likely in Europe first, then coming to the U.S.

This is how out electric future is getting built. One small component at a time. Keep an eye out.