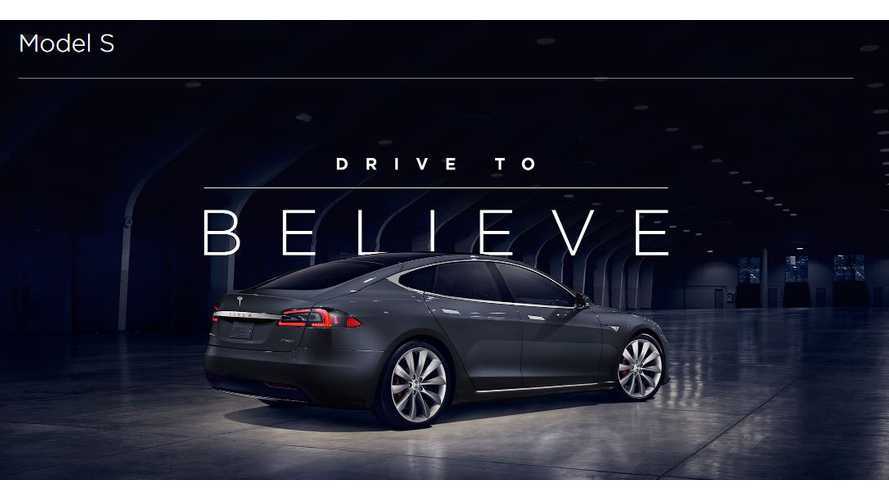 Tesla launches yet another competition, which is the electric automaker's indirect means of marketing without the use of traditional advertising.

The 'Project Loveday' fan-made commercial competition officially came to a close a few weeks back. Tesla will be choosing a winner soon. The Silicon Valley automaker's previous promotion, coined 'Drive to Believe', wrapped up prior to Project Loveday, and was similar to the latest competition.

'Drive to Believe' was a car-swapping promotion in which selected people could trade their current car for a Model S for a whole week. Of course, the premise was, once you drive one you will have to buy one. Tesla released a handful of promos videos to share people's experiences (below).

Continuing forward with the car-swapping promo's success, now Tesla will choose a few winners to test drive a Model S P100D or a Model X 100D on some of Europe's finest roads ... and you can even take a passenger along for the thrill ride. Hence, 'The Greatest Drive'.

“Enter The Greatest Drive and be one of the first to test drive a Model S P100D or Model X 100D on some of the greatest driving roads in Europe. This prize includes a suggested driving route plus 3 nights at Destination Charging hotels, to be used during your journey. Sign up for your chance to experience an unforgettable road trip. If you’d like to share the experience with a friend, nominate a co-driver to join you.”

Like the previous promo, this will be based in Europe, and unfortunately, you can't enter unless you reside in a European country: Germany, Italy, France, Spain, Portugal, Luxembourg, Austria, Belgium, Ireland, Denmark, Finland, Sweden, Norway, the Netherlands, Switzerland, and the United Kingdom.

The entry process, aside from providing your pertinent personal information, is to answer one question:

“What makes a drive great?”

Below is one of several promotional videos that came out of the 'Drive to Believe' campaign. The Tesla link at the bottom will take you to the contest entry page.