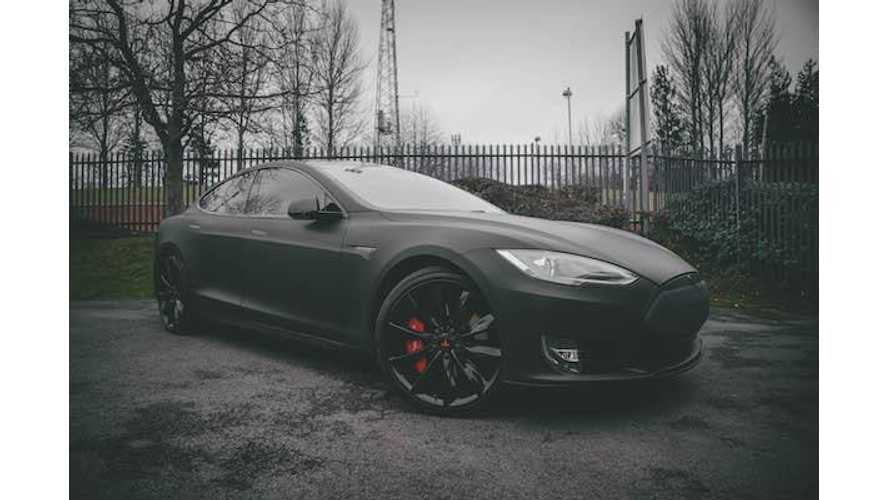 OLI SYKES MIGHT HAVE THE MOST SINISTER TESLA EVER

When Oliver "Oli" Sykes reached out to me on social media, I quickly learned he had... um, a few million followers. Between Twitter and Instagram, he's got plenty of adoring fans. I guess it helps to be the lead singer of Bring me the Horizon. The band has changed quite a bit as Sykes explains to UK's Independent: "We were just a metal band at one point. We were doing alright and playing some shows and now… now we’re one of the biggest heavy rock bands in the world." It turns out that Sykes is turning his fans on to another passion of his... Tesla.

Like everything Sykes does, he's doing it his own way. His Tesla is no ordinary Tesla. Sykes connected with me after he'd ordered a mesh grille and some red caliper covers for his new Tesla Model S. He was getting a few more things including a blade spoiler and lighted T — he wanted to make some mods to his Tesla in order to: "really pimp it out...  I'm getting it wrapped matte black." After getting all the work done, he sent me some stunning photos along with a note: "so just got the car back today…looks insane! Here's some photos... looks unreal right?" Indeed. It could be the most sinister Tesla Model S we've ever laid eyes on.

In any event, I wanted to include a brilliant photo gallery shot by Sykes' brother, Tom. You can check out more of Tom Sykes' photography on his site, Seven Points, and on Instagram. Looks like he's also shot some amazing photos for Sykes' clothing line Drop Dead. So... check out the murdered out Tesla below — just be sure to listen to Sykes' band, Bring me the Horizon, as you peep the photos...

*You can check out Bring me the Horizon and Oli Sykes on Twitter and Instagram; Photo credits: Tom Sykes, check out more of his photography on his site, Seven Points, and on Instagram