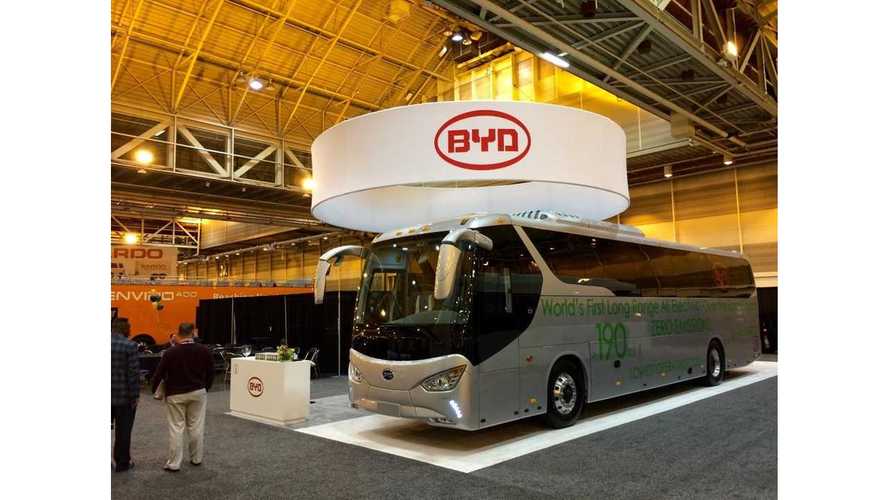 Moments later, the "most happening party in France" broke out!...as China's BYD Group is to invest €10 million in am electric bus assembly site in Hauts-de-France

After a plant project underway now in Hungary, the Chinese manufacturer intends to invest some €10 million further into the town of Allonne, near Beauvais, in Hauts-de-France for a second European facility. France tempted BYD because of the country's status as the largest native bus market in Europe.

The new facility, will in its initial phase, employ around 100 people and will be able to produce up to 200 vehicles a year; beginning from the first half of 2018.

"The project calls for around 100 jobs to be created in the initial phase. The production facility will occupy 32,000 sq m of a parcel totaling nearly 80,000 sq m, and will assemble up to 200 vehicles a year—single-deck buses and coaches—in its first phase. Other vehicles may be added as BYD expands its product line.

Production is scheduled to get underway in the first half of 2018. In addition to bus assembly, BYD plans an after-sales unit for maintenance and repairs, as well as a logistics center for spare parts. In the longer term, a test center for batteries could be added."

Of course all those people you seen in the photo above had something to say. So, if one feels like hearing from that group...here are the quotes!

"We chose France because it has Europe’s largest bus market. And we selected Beauvais and the Hauts-de-France region because of the quality of the building proposed to us, the region’s ideal location, and the proactive approach of local and regional authorities. I would like to take this opportunity to extend my personal thanks to the representatives of the Hauts-de-France region, the Beauvais Conurbation, Nord France Invest and Business France."

"We want to contribute to cleaner air in large cities. Diesel-powered urban buses are not only one of the leading sources of air pollution, they are also one of the vehicle categories that is easiest to electrify, since they travel along clearly identified routes. We anticipate a significant rise in sales of electric buses in Europe, and particularly in France, Europe’s largest national market."

"BYD's decision to set up in Hauts-de-France is great news for employment—our region’s top priority. A plant like this shows that we can attract major international corporations when we invest the resources to do so. Last but not least, production of electric buses fits in perfectly with our Third Industrial Revolution strategy, which aims to make Hauts-de-France a leader in energy transition."

For Caroline Cayeux, Senator and Mayor of Beauvais and President of the Beauvais conurbation:

"BYD's choice confirms the Beauvais region’s appeal for business, and underscores our capacity to host cutting-edge industries. The company found the buildings it needed here, and along with skilled human resources from our labor pool. We set out what we’ve got to offer, and our assets met BYD Group’s requirements in full. The result is the win-win partnership that we are launching officially today, and I'm delighted both for our region and for the people who live here."

"This project testifies to the industrial vigor of the Oise and its capacity to back cutting-edge industries that address the transition toward sustainable energy sources. It results from closer ties between the French State and local communities, working in partnership to revitalize regional development and employment. France's national administration is on board and prepared to do everything it can to help BYD settle into the Beauvais area."