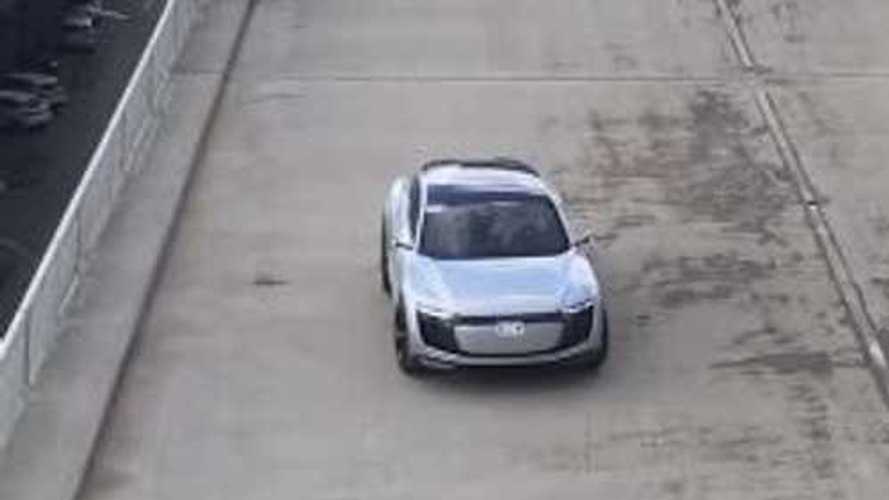 But what was it doing there?

Concepts usually get their 15 minutes of fame at a glitzy auto show and then fade into the darkness, but that’s not the case with the Audi E-Tron Sportback. The electric SUV seen originally earlier this year at Auto Shanghai has traveled to Germany to climb on top of a building somewhere in Hamburg. Why? We have no idea, though it might have had something to do with Audi’s new ad campaign in its homeland, which includes that controversial “Musk-Have” billboard set up in Berlin.

The short video recorded by someone from an adjacent taller building briefly shows the E-Tron Sportback silently riding on those gargantuan 23-inch alloy wheels. These are a bit too much for our tastes, but that’s not that much of an issue considering the actual production model will likely downsize to a smaller set.

Unlike many other showcars, this clip goes to show the concept is actually functional and looks quite special with its sloped roofline. We’ll be seeing more of that continuous brake light in the coming years as the new A8 flagship debuting next month is set to kick off this trend within Audi. Chances are the next-gen A7 Sportback due late this year will have it as well and will be followed by the all-new A6 in 2018.

Speaking of production cars, the E-Tron Sportback will morph into one in 2019. It’s more than just a rumor as the announcement was made by Audi when the concept received its world premiere in China. It will come out approximately one year after the E-Tron Quattro and will serve as a sleeker “coupe-SUV” spin-off.

Slightly shorter, narrower, and significantly lower than a Tesla Model X, the E-Tron Sportback in concept guise has an electric powertrain with 430 hp (320 kW) or as much as 496 hp (370 kW) once the boost mode is turned on. It does the 0-62 mph (0-100 kph) run in 4.5 seconds and has enough battery juice from its 95-kWh pack to last for more than 310 miles (500 km) in the New European Driving Cycle. We’ll have to wait and see whether these exact specs will carry over onto the production model, though.

The regular E-Tron Quattro (pictured below) can already be pre-ordered in Norway where early adopters can make a reservation by giving Audi a check for the equivalent of $2,900.

Exact details about the electric SUV’s pricing are not available at the moment of writing. The fancier Sportback version will likely command a premium over the “regular” model, much like those coupe-SUV mashups are more expensive than the regular models they’re based on. It will be the same case with the Q8 & Q7 pair as well as with the Q4 & Q3 duo.