Chinook ETS Drives Like, And Against, The Wind - Video 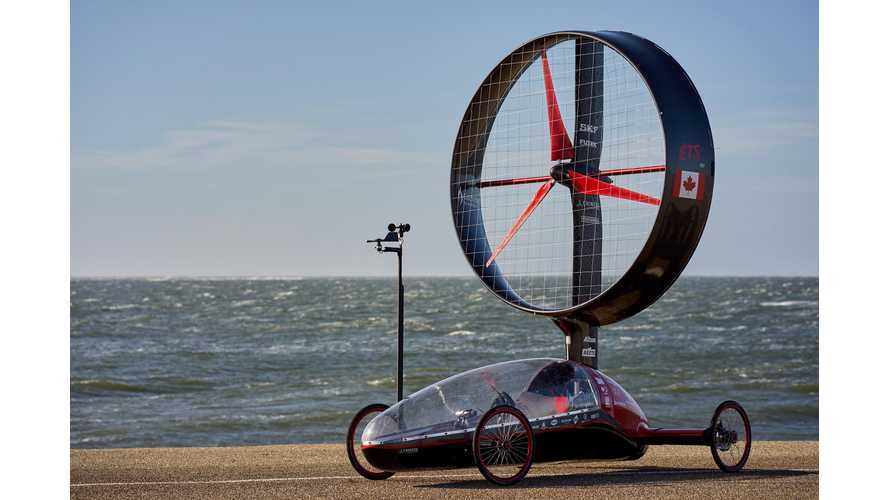 It's part sailboat, part wind turbine, and all student-built. The Chinook ÉTS is the most unusual vehicle here at the Movin'On sustainable mobility conference in Montreal this week, so we had to go take a closer look. What we found was a sleek little pod designed not only as an engineering project and race car, but as a way to turn wind into motion.

The vehicle on display is the sixth version of the Chinook ÉTS. That doesn't mean there are five older vehicles sitting in a garage somewhere, since each year, the student engineering team from École de Technologie Supérieure (ETS) here in Montreal updates or adapts the vehicle from the year before. The turbine gets raised, for example, or the blade design is adjusted. The next version will have more dramatic changes, like the front wheels being inside the frame, which should make it 25 kilograms lighter (down to 95 kg from the 120 kg of the vehicle display here). The next version exists only in digital renderings for now, but you can see it better by clicking on the image to the right. The Chinook ÉTS student club was formed in 2009.

So, what's the point of a quirky vehicle like this? Well, Nicolas Cote – the somewhat jokingly self-described chief engineering officer – it's about two things. First, it's the annual wind vehicle challenge called Racing Aeolus. This is an annual event that take's place in August at the Sea Dyke in Den Helder, Holland with the stated challenge to "sail against the wind." This means generating electricity from the wind and using it to move a vehicle in the direction where the wind is coming from. There are no batteries on board (they'd be too heavy) so the Chinook ETS takes the wind energy from the 3,000-watt turbine, sends it down a driveshaft in the mast to a 14-speed gearbox in the back with a clutch and a differential, and then to the wheels. The vehicle's maximum speed is 42.75 kilometers per hour (26.5 miles per hour) and needs wind speeds of between 12 and 45 kph (7.4 and 28 mph) to operate.

Second, the mission is to learn. Cote, for example, worked on the materials for the vehicle, things like the carbon fiber chassis. Cote is getting a masters degree in composite materials, so even if the vehicle is a fanciful beast, the education is real.