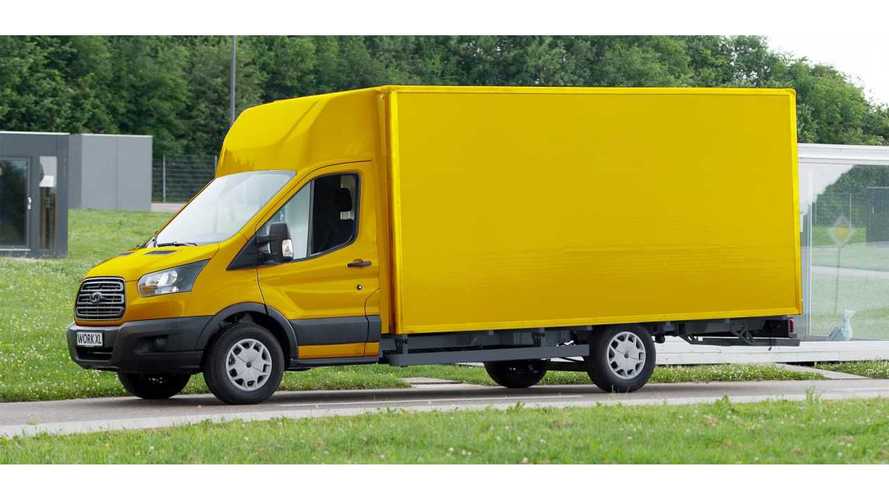 Deutsche Post's electrified plans haven't stopped at just having a massive fleet of StreetScooter EVs, as the German postal service has just announced a deal with Ford to produce even bigger plug-in vans, using the Ford Transit as a base.

Initially, Deutsche Post acquired StreetScooter and immediately ramped up production of its own electric delivery vehicles, mostly because no other OEM was able to do the job to its timeline and satisfaction.

The StreetScooter GmbH subsidiary has now already produced and put more than 2,500 EVs into service, and is now preparing a new facility in order to build 20,000 units a year - both for personal use in its fleet, and to sell to others as a secondary offering for profit.  Now that's forward thinking.

The new partnership with Ford-Werke GmbH is all about the E-Van, which will use a Ford Transit chassis underpinning an EV conversion.

"Deutsche Post subsidiary StreetScooter GmbH and Ford-Werke GmbH are entering a partnership for the manufacturing of battery-electric delivery vehicles.

Deutsche Post has already left its mark in the smaller van segment by designing and producing the emission-free StreetScooter, now both partners are working on a larger vehicle type. The chassis of the Ford Transit provides the technical basis. It will be equipped with a battery-electric drive train and fitted with a special body construction based on Deutsche Post and DHL Paket specifications.

The start of production is scheduled for July 2017. Before the end of 2018, at least 2,500 vehicles will support the urban delivery traffic of Deutsche Post DHL Group. With this volume, the joint project will become the largest manufacturer of battery-electric medium-duty delivery vehicles in Europe."

Jürgen Gerdes, member of the executive board of the Deutsche Post AG said:

“I consider this partnership another important boost for electro-mobility in Germany. This step emphasises that Deutsche Post is an innovation leader. It will relieve the inner cities and increase the people’s quality of life. We will continue working on completely carbon neutral CO2-neutral logistics!”

“E-Mobility and innovative traffic solutions for urban areas are key focuses for us as we transform our business to meet future challenges. As the leader in commercial vehicles in Europa, this partnership plays perfectly to our strengths and in StreetScooters and the Deutsche Post DHL Group we have a partner with enormous competence and a worldwide network.”

"In addition to the new assembly line, the existing manufacturing of the StreetScooter models will be significantly expanded as previously announced. StreetScooter GmbH is planning to manufacture 20,000 units per year of their successful small electrical delivery van in different versions in Aachen and another site in North Rhine-Westphalia. Today, there are already 2,500 StreetScooters in use for Deutsche Post throughout Germany. More and more prospective buyers from the outside are signalling their interest or have already received StreetScooters in order to convert their fleet to zero-emission operation."