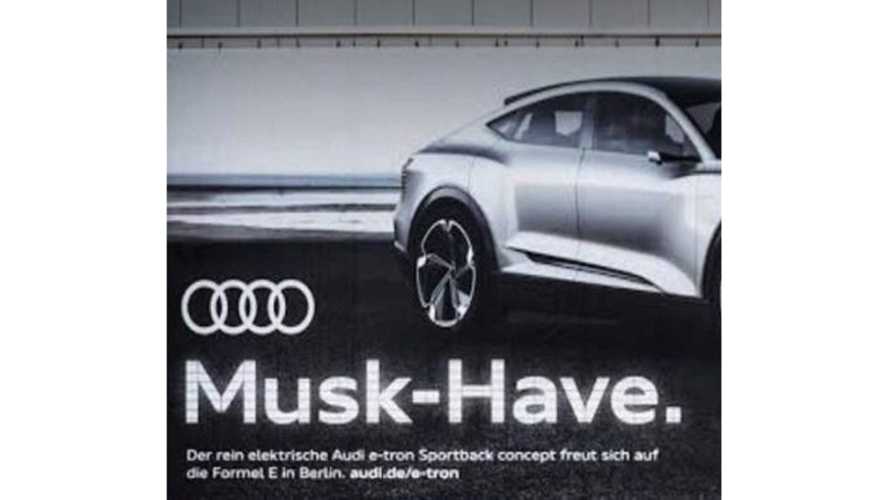 Does it make sense to reference a future rival that is already proven in the market?   Especially as a company that doesn't yet offer a competitive product?

Audi has ads for the E-Tron Sportback concept on display in Berlin, and the poster features a cheeky message playing on Elon Musk. The Audi City Berlin showroom now features a massive sign on its outside with the message Musk Have, and it implores people to check out the Four Rings’ own idea for an electric crossover at the recent Formula E visit to the city.

Directly evoking the Model X when promoting the E-Tron Sportback concept is an aggressive, potentially risky decision. Customers can arrive at Tesla store today and immediately drive away in the firm’s electric crossover. Meanwhile, Audi doesn’t have a competitive model on sale yet, and the electric E-Tron utility vehicle doesn’t arrive from the Germany company until sometime in 2018 - let alone the E-Tron Sportback shown in the ad spot, which isn't pegged to arrive until 2019.

Again, we know Audi intends to get very serious about EVs in the coming years, with the standard E-Tron Quattro in 2018, then the E-Tron Sportback in 2019.  But from there, the Four Rings will look to add electric variants of the Q8 and Q4 starting around 2020. According to the automaker’s goal, 30 percent of its deliveries will be fully or partially electric by 2025.

Audi’s factory in Brussels, Belgium, will be an early hub for building these electric models. The production E-Tron Quattro will feature a 95-kilowatt-hour battery with a range around 310 miles (500 kilometers). Three electric motors – two in back and one in front – will offer a total of 503 hp (370 kilowatts) during temporary periods of extra output. The ample power will reportedly get the electric CUV to 62 mph (100 kph) in 4.6 seconds.

Tesla’s electric crossover looks to expand in the near future, too. The company is teasing the Model Y (shown above - details here) as a smaller CUV for its range. According to Elon Musk, the model will have a unique platform and will come from a dedicated factory. It’ll reportedly arrive in 2019.