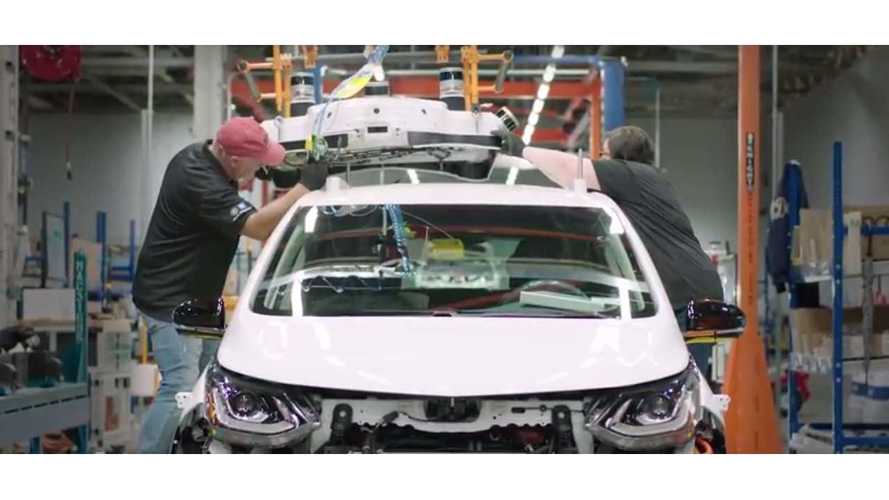 In less than one minute, we see a Chevrolet Bolt EV autonomous test vehicle assembled.

The self-driving Chevrolet Bolt test vehicles are manufactured at the General Motors Orion Assembly plant in Orion Township, Michigan. While they aren't assembled in one minute, you can bet that it all happens pretty fast, although it's not primarily an automated process.

The large computer/hardware unit that fits in the Chevrolet Bolt's hatch.

The cars come down the line partially deconstructed so that workers can attach sensors on the outside of the vehicle and hardware inside. The roof rack goes on first, consisting of lidar modules, cameras, and side-mounted articulating radar units. A large unit consisting of the computer and other hardware fits inside the hatch of the Chevrolet Bolt and a tablet goes up front in the middle of the dash.

This proves that the company has the capability to mass-produce the cars. Mary Barra made the announcement in front of a large group employees Tuesday at the facility.

“This production milestone brings us one step closer to making our vision of personal mobility a reality. Expansion of our real-world test fleet will help ensure that our self-driving vehicles meet the same strict standards for safety and quality that we build into all of our vehicles.”

"The autonomous vehicles you see here today are purpose built, self-driving test vehicles. The level of integration in these vehicles is on par with any of our production vehicles, and that is a great advantage. In fact, no other company today has the unique and necessary combination of technology, engineering and manufacturing ability to build autonomous vehicles at scale."