Check Out This Funky Tesla Model X In Finland! 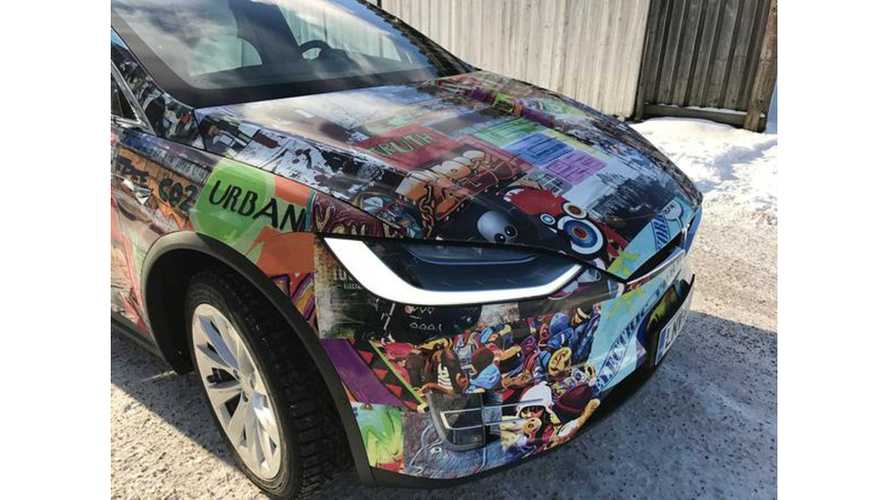 TESLA FINLAND: A NEW LOOK FOR THE MODEL X

I was recently contacted by a young man, 22 years old, who's been dreaming of owning a Tesla. Aatu Hintsala reached out to me via Instagram where he goes by the alias of @teslasuomi. His Instagram feed features stunning photos of his favorite Teslas. It turns out that "Suomi" means Finland in Finnish. And he had some special Tesla Model X photos he wanted to share with me from his homeland.

Aatu sent some remarkable images of a Tesla Model X owned by Kari Kallonen, President of Tesla Club Finland. When asked about his Model X, Kallonen told us that his,

"Tesla Model X 90D was originally black. It's my second Tesla and sixth wrapped car. I feel that ordinary vehicles are all so similar that something has to be done. A Tesla itself is already a special, head-turning vehicle, but still, 90% of the public doesn't notice your vehicle in everyday life. So with my Tesla, I wanted to introduce artwork designed by me and my daughter. Our style moves between graffiti and digital photography."

When asked about the overall theme of his artwork, Kallonen explained:

"The collage layout and color gradient come from a story I heard about Albert Einstein. One day Einstein was travelling in a tram and he was thinking about what would happen if the tram went to light speed or beyond. If you look far enough straight ahead everything would look normal, but, by your sides colors would start to become black and white and vanish into nothing."

So what's the deeper meaning? He explained, "If you're travelling beyond light speed, time is meaningless and if there is no time (or it is some other form), there is nothing."

Kallonen is hopeful that electric vehicles (and Tesla) will change our world in a similar way in which Einstein changed our understanding of the universe. I asked him about the Tesla scene in Finland and he explained, "As President of Tesla Club Finland, I see a great future for Tesla here in Finland. Our country is large. We drive long distances and Tesla is the only EV which can be used like a regular car — even during winter time. And the public in Finland remains well-informed on Tesla as the media covers the company regularly."

I asked how many Tesla owners were in Finland and Kallonen noted that, "Right now we have only 450 Teslas in Finland." Nevertheless, he mentioned that the number will likely grow once the Model 3 is launched. He also mentioned efforts are underway in Finland to get the next Tesla Gigafactory. In any event, it's great to see the Tesla movement growing worldwide. A big thanks to Aatu for sending these photos our way and we hope he reserves his Model 3 soon. If you'd like to check out his stunning Instagram feed, be sure to follow him at @teslasuomi.