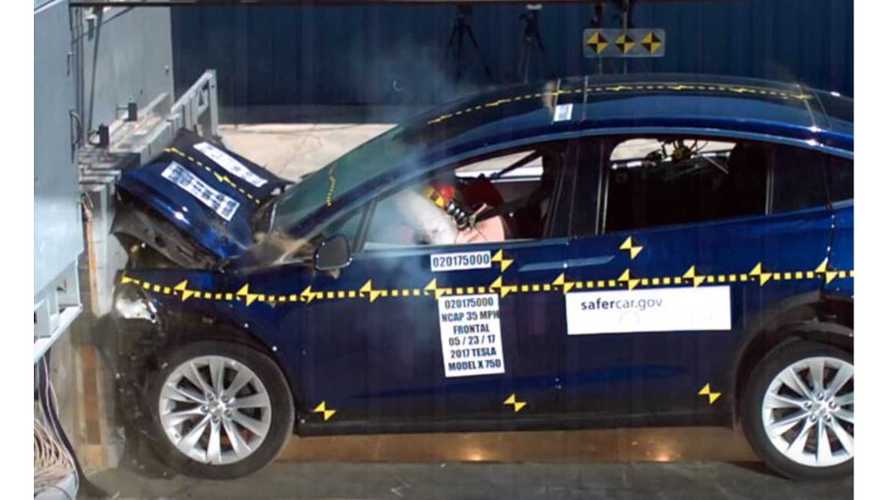 Safest SUV in the world? Maybe...

The National Highway Traffic Safety Administration is conducting crash tests on a 2017 Tesla Model X. The full results are in. The X received 5 stars in every category.

First up, the frontal crash test. Here's the description via CrashNet1:

The frontal crash test evaluates injury to the head, neck, chest, and legs of the driver and front seat passenger. Crash test dummies representing an average-sized adult male and a small-sized adult female are placed in the driver and front passenger seats, respectively, and are secured with seat belts. Vehicles are crashed into a fixed barrier at 35 mph (56.3km/h), which is equivalent to a head-on collision between two similar vehicles each moving at 35 mph. 1 star is the lowest rating; 5 stars is the highest. More stars equal safer cars.

Moving on to the side crash test. Here's the description via CrashNet1:

Crash test dummies representing an average-sized adult male and a small-sized adult female are placed in the driver and rear passenger seats (driver's side), respectively, and are secured with seat belts. The side crash rating represents an intersection-type collision by having a 3,015 pound (1367kg) barrier moving at 38.5 mph (62km/h) into a standing vehicle. The moving barrier is covered with material that is crushable to replicate the front of a vehicle. 1 star is the lowest rating; 5 stars is the highest. More stars equal safer cars.

The last test posted so far is the pole crash test. Here's its description via CrashNet1:

A small-sized adult female crash test dummy is placed in the driver's seat and is secured with a seat belt. The test vehicle, angled at 75 degrees, is then pulled sideways at 20 mph (32km/h) into a 25-cm diameter pole at the driver's seating location. This test mimics a side impact crash involving a narrow, fixed object like a utility pole or tree. 1 star is the lowest rating; 5 stars is the highest. More stars equal safer cars.

With 5 stars across the board, the Tesla Model X is among the safest vehicles on the road.

Here's a NHTSA link to the crash test results for the 2017 Tesla Model X 75D.

And here's Tesla's release on the topic:

We engineered Model X to be the safest SUV ever, and today, the National Highway Traffic Safety Administration (NHTSA) announced that after conducting independent testing, it has awarded Model X a 5-star safety rating in every category and sub-category, making it the first SUV ever to earn the 5-star rating across the board. More than just resulting in a 5-star rating, the data from NHTSA’s testing shows that Model X has the lowest probability of injury of any SUV it has ever tested. In fact, of all the cars NHTSA has ever tested, Model X’s overall probability of injury was second only to Model S.

Model X performs so much better in a crash than gas-powered SUVs because of its all-electric architecture and powertrain design. The rigid, fortified battery pack that powers Model X is mounted beneath the floor of the vehicle creating a center of gravity so low that Model X has the lowest rollover probability of any SUV on the road. No other SUV has ever come close to meeting and exceeding this rollover requirement.

NHTSA’s tests assess both the structure of the vehicle, which must minimize intrusion into the cabin and absorb as much energy as possible, and also the seatbelt and airbag restraint system, which must maximize injury mitigation in the event of a crash. Among the nine subcategories rated by NHTSA, including frontal impact, side impact, and pole impact tests conducted on both the driver and passenger side as well as the rollover test, Model X achieved 5-stars in every category and sub-category. That means that in the event of a serious crash, Model X occupants have an overall 93% probability of walking away without a serious injury – a testament to our commitment to building the safest cars on today’s roads.

Also, and to confirm why these tests are done, InsideEVs' community member Scott F, passed along this shot (above) of the aftermath of a collision with a deer at 70+ MPH in the comments, noting the following:

"One week ago on road trip traveling through WY at 70+ MPH a deer came thru my X windshield & then we hit a tree. Reports are another car hit the deer first then it hit me. My son is unscathed. I’m hurt from deer only. Still working through medical needs on my left eye and eye socket. BTW, after the accident my son exited the passenger front door then was able to open the drivers side Falcon Wing Door (FWD) to get his backpack/phone so he could talk to 911 and let them zero in on our location.

...This could not be more real for me or my family. I am thankful my son is OK and the rest of me (besides eye/socket) is close to 100% ok. I’m thankful on many levels to many people...Timing of the Tesla Model X safety hit home to me in an incredible personal way. I am happy all car companies and safety testing verify worse case scenarios."