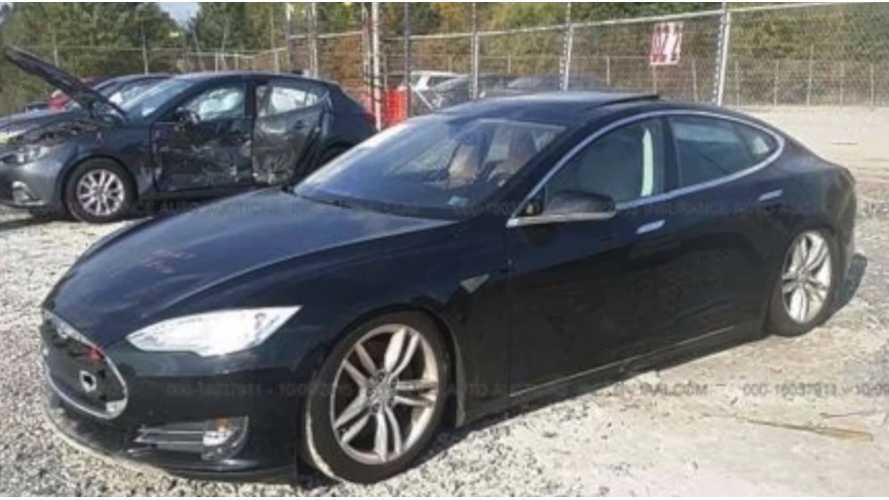 Episode one of this podcast style series explains the story behind this Tesla Model S, and the beginning process of repairing it from flood damage.

This one is interesting, and much unlike any of the videos we usually come across. Rich the Car Guru (YT channel - Car Guru) wanted a Tesla, but he wasn't going to drive it much, and was unwilling to spend a lot of money. So, he decided on a salvaged, flooded vehicle for $14,000, which he has affectionately named Dolores.

Editor's Note: If the podcast style of the video (above) isn't your thing, you can also jump ahead and check some live action, in a video update below.

This is what submerging your Tesla Model S in salt water will do.

Keep in mind that it's going to cost him some money when it's all said and done, and take an incredible amount of time, and you can get a CPO Tesla Model S now for under $40,000. But obviously, Rich is very passionate about his projects and we have to give him credit for taking the time to document the entire process.

There's not a better way to get to know your car than to completely disassemble and rebuild it. Being that this process is a lengthy one, Rich is presenting it in the form of a multi-episode podcast with some pictures (he says you don't really need to watch the video). The "slides" and video clips give us an idea of what he's up against, but there's enough verbal information that you honestly don't need to watch.

It's pretty informative and really quite fascinating to listen to. Rich is meticulously attentive to details, and he does all of the work himself, in his garage, with basic tools and often unconventional methods. Due to the car's horrible condition (it's filled with salt and nothing functions), sometimes it takes crowbars and brute strength to make any small amount of progress. Commenters are already excited for episode two, and subsequent episodes. We will definitely be tuning in!

Part one of me rebuilding my flooded Tesla Model S (Dolores). It was found on copart and listed as a salvaged flooded vehicle. This first section discusses me finding the car online, taking delivery, entering the car for the first time, starting the teardown of the various components, seat removal, all the rust I’ve found, as well as the status of the main computer, many more parts to follow!

Spoiler Alert: He pulled it off, and calls Dolores, "The car that, in a sense, made me famous." The flooded Tesla Model S was nearly done back in April, and the video below is proof. However, he is releasing the episodes now, one a time. As the episodes surface, we will continue to share.

Four Vlogs - Day 1 through 4 are also online now and follow the update.