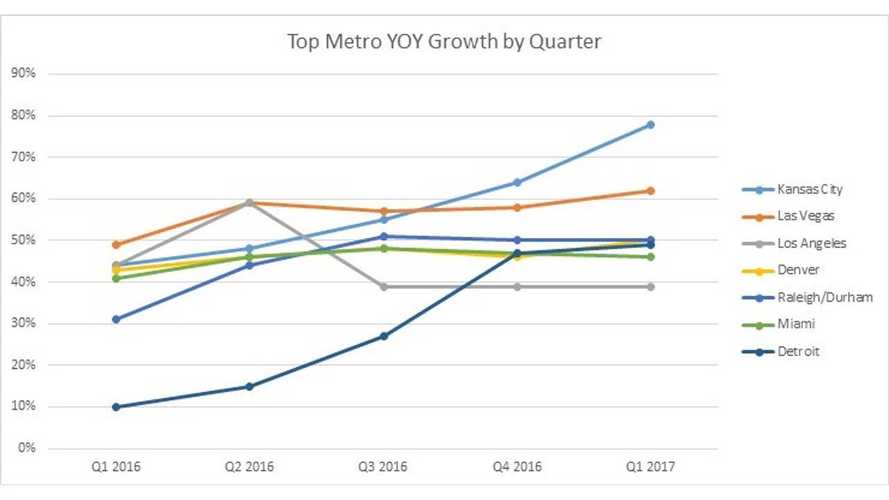 For the second consecutive quarter, Kansas City is experiencing fastest growth of electric car sales in according to IHS Automotive data and the Electric Power Research Institute (EPRI),

One the reasons that has transformed Kansas City into a hot spot for electric vehicles is a new and deep charging network - KCP&L Clean Charge Network  (see announcement from two years ago about 1,000 charging points here).

The network was built by Kansas City Power & Light Company, and now is not only one of the nation’s largest, but was first project of this scale implemented by a public utility.

"Nearly 95 percent of the planned 1,000 public charging stations have been installed throughout the Kansas City metro area, with more deployed every day. The network has offered free charging to EV drivers since its debut."

"Since deployment of the KCP&L Clean Charge Network began in 2015, the metropolitan area has experienced a 95 percent increase in electric vehicle adoption. In addition, Kansas City was awarded number one in driver and charging station growth by ChargePoint, a manufacturer of EV charging stations, in 2016."

“The Clean Charge Network provided the necessary charging infrastructure for drivers, but also made Kansas City the gold standard for electric transportation. Kansas City has built a reputation as an innovative and sustainable place to live, and we’re proud to contribute to that success.”

More about correlation between charging and EV sales:

A study from the National Academy of Sciences listed a lack of awareness and range anxiety — or the fear of running out of charge — as typical barriers to electric vehicle adoption. The KCP&L Clean Charge Network has set out to overcome them.

“With the sheer number of charging stations — strategically located where people live, work and play — KCP&L’s Clean Charge Network eliminated range anxiety in the Kansas City region. The idea is to allow people to charge their cars as they do their cell phones, plugging in as they go about their daily lives,” said Caisley.