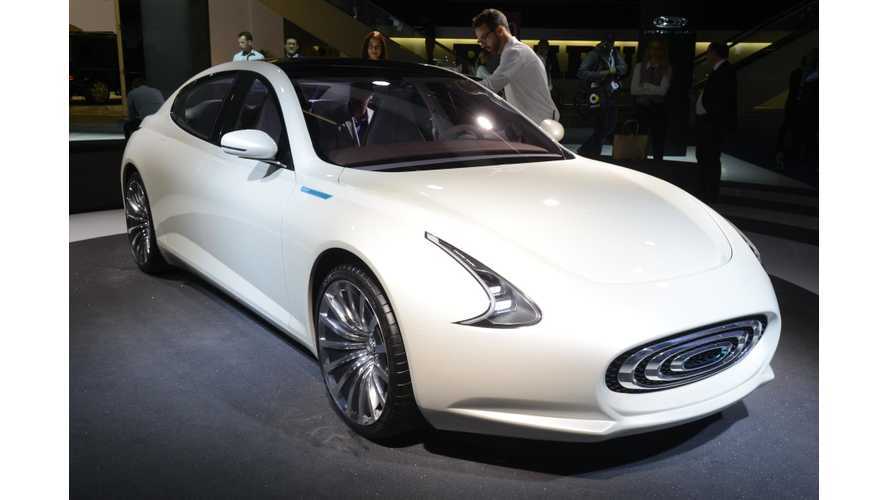 Thunder Power which unveiled its concept electric car almost two years ago at the Frankfurt Motor Show (photos and videos here), says it has an edge over competitors - including Tesla (a frequent comparison in press releases that always makes us cringe).

The Thunder Power EV with its 125 kWh battery and 400 miles of range was originally planned for introduction in 2017 (Europe) and 2018 (China), followed by U.S.

Apparently, that 'edge over Tesla' isn't speed to market...moving on.

As of today, the Hong Kong-based company has filled more than 350 patent applications in the U.S. and China (maybe that is the edge?).

70 have been granted, including one of the apparently most important - a modular chassis system - "that allows flexibility in the design of future car models, making development and assembly faster and more cost-efficient".  Hrm, sounds familiar.

Thunder Power's goal is to build most desirable EV in China, but like most OEMs with China-dreams, they can't refrain from referencing Tesla.  WardsAuto explains:

"“An obvious difference between us and (U.S. EV maker) Tesla is we have the key technologies before actually investing in manufacturing,” Wellen Sham, Thunder Power CEO, tells WardsAuto at a launch event in Shanghai."

"“We are the world’s first company that got this modular-chassis patent,”."

Another in-house developed technologies is thermal-management system for the battery.

Thunder Power EV From Above

The next step for Thunder Power is to build a test fleet of 20 pre-production cars, that will be tested over a period of one year in broad temperature conditions.

"Climatex testing is vital for the Chinese market, where winter temperatures drop as low as -22˚ F (-30˚ C) in the country’s northern reaches. Thunder Power also plans to sell cars in the Middle East, anticipating the region increasingly will welcome EVs that can tap into a fast-growing number of solar-powered charging stations."

At The Controls Of The Thunder Power EV

We will see the production version, designed by a team in Italy, at the Frankfurt Motor Show in just a few days.

While the production facility itself is to be operated in Ganzhou, in the Jiangxi province of China, though a joint venture with the local government of Ganzhou. Facility to cost RMB7.5 billion ($1.1 billion).

"But the current focus, Sham says, is to supply the Chinese market, including Hong Kong, Taiwan and Macao, from a plant in Ganzhou in Jiangxi province. A joint venture between Thunder Power and the local government of Ganzhou, the facility’s construction and commissioning is funded with RMB7.5 billion ($1.1 billion) from a local investment fund backed by China’s national development and reform commission.

Thunder Power’s own investment has been in securing its 10 core patents valued at RMB1.3 ($187 million). Thunder Power also will be in charge of the daily management of the facility."