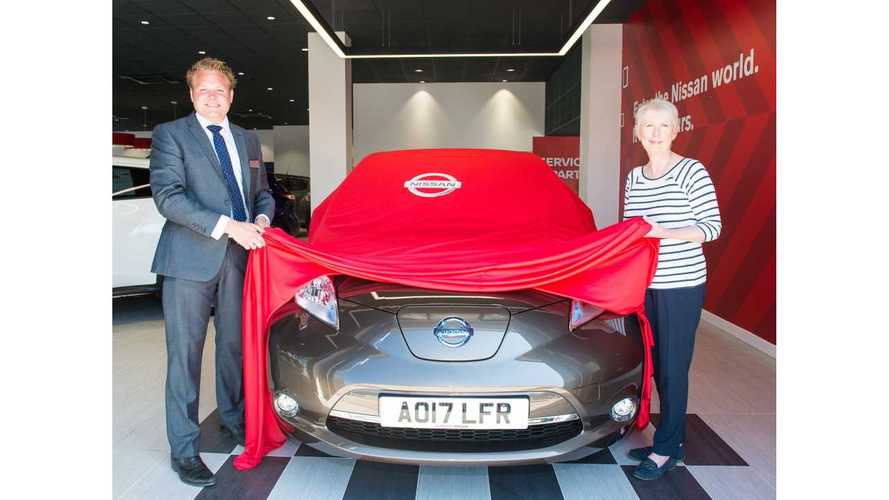 Nissan celebrates the fairly significant milestone of its 20,000th LEAF delivered in UK (out of more than 260,000 total deliveried worldwide), while also picking up the ‘Best Green Car’ in 2017 by Driver Power Survey (as well as ‘Best Engine and Gearbox’ and ‘Best MPG and Running Costs’) at the same time.

Sales of the LEAF in the UK began in March 2011, which at the time was imported straight from Japan.

After four years (in 2015) Nissan UK reached 10,000 sales, and over another year hit 15,000, then it took a further 8 months of late to pass 20,000 - so the growth trend has been going in the right direction, despite the model now entering the late stages of its first generation (2nd gen LEAF to debut in less than 3 months).

However since 2013, the LEAF has been produced locally in Sunderland, UK.

The 20,000th LEAF was bought by Diane and Chris Ray of Hollesley in Suffolk, who took home a range-topping 30kWh LEAF Tekna from local dealer Hammond Nissan.  This wasn't the couple's first LEAF either, as the 2017 edition replaces a two year-old 24 kWh LEAF.

“I love the LEAF. It does everything I want from a car and is beautiful to drive.

“When the time came to replace mine I didn’t look at anything else. I only wanted another LEAF but this time with the bigger battery.”

She added: “It was a real surprise to find out I was the 20,000th LEAF customer but it’s so encouraging to see more and more people switching to all-electric cars and exciting to know I’m a part of that story.”

“The 2017 Driver Power results are a fantastic recognition of the strengths of the Nissan LEAF. What’s really important is these results are based on the honest feedback of the public, so it’s a true indication of the positive ownership experience of living with a LEAF.

“Hitting the 20,000 sales milestone is further proof that the electric revolution is taking hold here in the UK. We’ve seen more demand for LEAF in the past 12 months than we had in the first 3.5 years of the car being on sale and the number of customers who go on to buy another LEAF is also significantly higher than the industry average. With the new model on the horizon, this growing demand is only set to gain pace.”