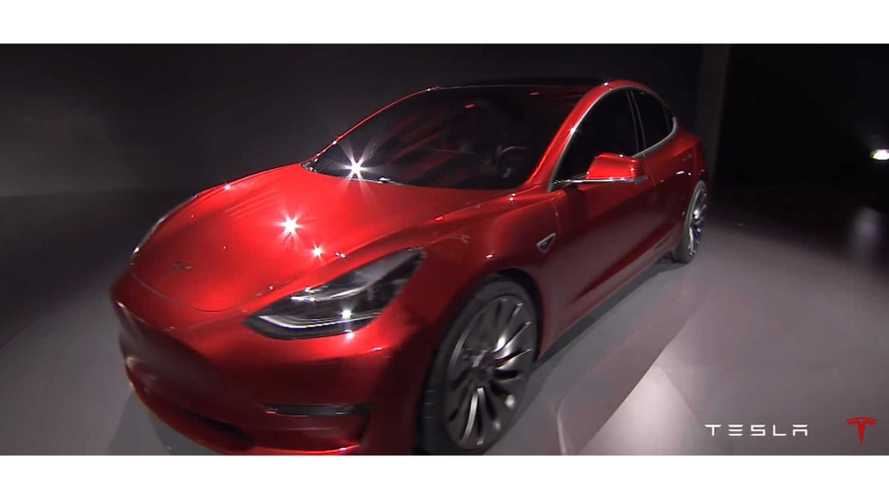 Not surprisingly the topic of interest from Tesla's shareholder meeting was on the company's upcoming launch of the Tesla Model 3, and CEO Elon Musk didn't disappoint with handing out the information.

The most important news for the unwashed masses was that both the first delivery, and Tesla's Design Studio/configurator for the Model 3 would happen next month in July.

"(On the) Model 3 configurator, we expect that the configurator to go live towards the end of next month (July) when we deliver the first production Model 3.

...we are definitely on track to deliver the first production Model 3 next month. That’s going to be really exciting, and then we will have the configurator to go live right at that point."

How many Model 3s will be delivered out of the gate remains unknown - it kinda sounds like just one, but the fact that the configurator won't be online until later in July (and we have scant details on the specifics of the Model 3 still), probably means that the initial delivery volume will perhaps be lower than some prior expectations.

But with that in mind, the CEO said Tesla would not be making the same mistake as it did with the Model X (so as to achieve a "rapid production ramp"), and that early customers for the Model 3 shouldn't expect much in the way of actual configurable options.

"...I should say that we have kept the initial configurations for Model 3 very simple.

This is critical to achieving a rapid production ramp. A big mistake we made with the X which is primarily my responsibility, (there was) way too much complexity right at the beginning.... that was very foolish.

So we (are) going back to the launch of the Model S, Model S only had one configuration at the start of production.  It had one configuration because that’s all that we could do...and then the Model X is like the faberge egg of cars. I think it’s really an amazing product, but it has way too many cool things in it that should have really been rolled in with version two, version three -- that would have been the sensible way to do it.

We got overconfident and created something great that probably will never be made again. And perhaps should not be."

Basically, Tesla will have a pre-packaged RWD offering out of the gate, and customers can choose only two options (AWD to arrive in late 2017/early 2018, with the configurator being updated sometime after the initial roll-out with future options and ETAs):

Specifics on the colors and wheels were not given, however several "release candidates" seen on the roads already have likely foreshadowed some of those colors (silver, black, while, blue and a couple red hues), while an early comparison/selling spec sheet (between the S & 3) produced by Tesla has divulged that both 18" and 19" wheels will be offered out of the gate on the Model 3.

As for the larger questions: battery sizing, performance, and of course cost...still no word.