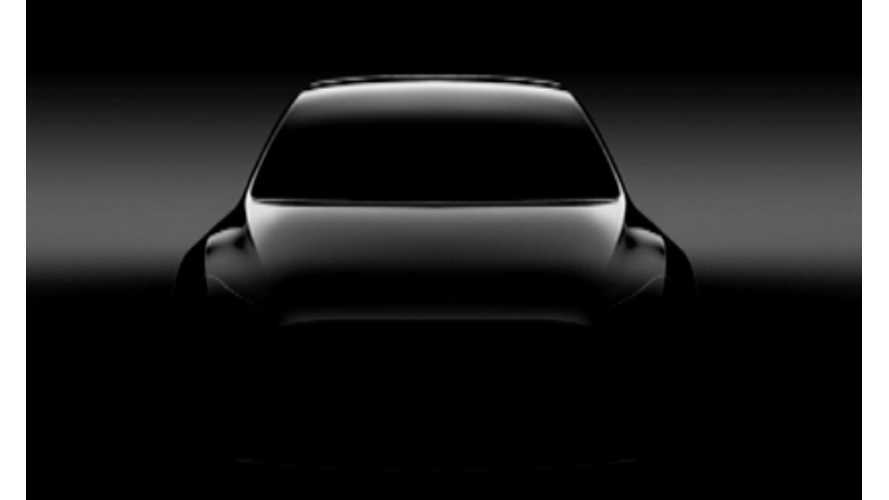 From Tuesday's Tesla shareholder meeting we got our first look at the company's Model Y compact utility vehicle...more or less.

The cloudy teaser shot foreshadows the company's next offering, after the Model 3 heads into production next month.

During the conference call, CEO Elon Musk took the time to explain that the Model Y would be manufactured in a "way that a car has never been built before", meaning it will have its own unique platform apart from the Model 3, from a dedicated factory.

Musk felt that capital expenditures on the Model Y would be a lot lower than that of the Model 3, perhaps by as much as a "factor of 2".

We do know for sure from the teaser image that some money will be saved on producing pesky things like side mirrors.

The CEO stated (not unlike previous with the Model X over the Model S) that he expects the Model Y to outsell the Model 3 in the future, while admitting the company made more than a few mistakes in its rollout of the Model X., including the attempt to build the SUV off of the sedan's platform.

From the shareholder call on the Model Y:

Elon Musk: "I am really excited about Model Y. It’s, there's been some criticism, like we should sort of derive it from the Model 3 platform. But I think actually we made a mistake in trying to derive the Model X from the Model S platform.

It would've been better to just design an SUV the way an SUV should be designed. Design a sedan - the way a sedan should be designed. Otherwise you'd just try to shoe horn something that doesn’t make sense. Also there are a number of I think really major manufacturing improvements that can be done that allow us to build the car in a way that a car has never been built before.