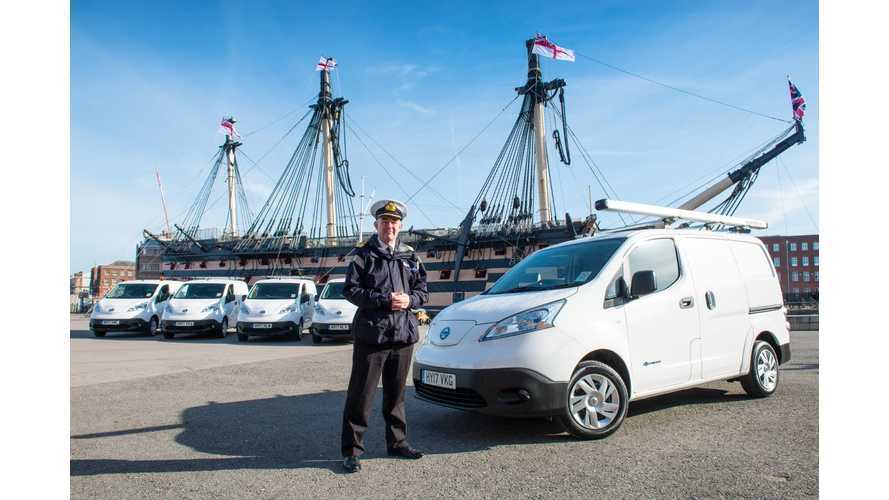 Nissan has completed one of its largest ever e-NV200 (all-electric van) order for the UK market.

Some 48 Nissan e-NV200s have now been delivered to the Portsmouth Naval Base, in a deal with BAE Systems  - who manages the site on behalf of the Royal Navy.

Carbon dioxide emissions of the e-NV200s are about 40% less than current conventional vehicles.

"The agreement, also in association with fleet management specialists Lex Autolease with whom Nissan and local dealership Yeomans Nissan Portsmouth have been working very closely, is aimed at creating a more modern and energy efficient Naval Base fit for the 21st century, a key goal for the Ministry of Defence.

And as part of the BAE System’s commitment to reduce emissions and increase energy efficiency across the site, 26 charging points and 28 designated parking bays for electric vehicles are being installed."

“Nissan’s electric vehicle technology is cutting-edge, so it’s great synergy to be working closely with world renowned BAE Systems to help save energy and reduce emissions at Portsmouth’s historic naval base.

“Of course the other real bonus of operating Nissan electric vehicles are the ultra low-running costs, starting from as little as two pence per mile.”

“We have worked closely with Lex Autolease and Nissan to introduce this new fleet that makes a significant reduction to carbon dioxide emissions and respects our customers need for a value for money solution.

“The reduced emissions and fuel use by replacing nearly half of the fleet with Nissan electric vehicles would have a significant environmental impact on Portsmouth Naval Base.

“The arrival of such a large number of Nissan electric vehicles to support our activities at the Naval Base reiterates the company’s commitment to creating more energy efficient ways of working and adopting the latest technologies.”