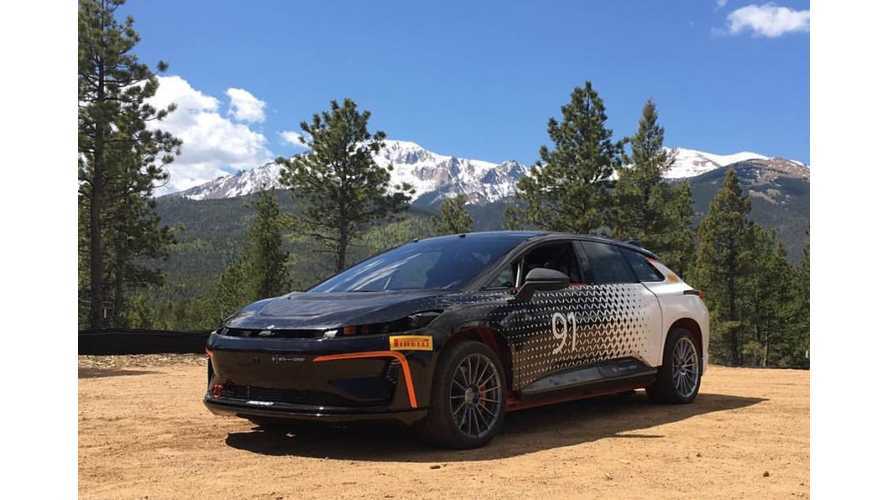 There's more to the challenge than the height.

As promised back in February, Faraday Future is getting ready to climb Pikes Peak this summer. Today, the company released some more information about the climb attempt as part of its "testing series." The automaker is starting a video series called, "Testing the FF 91," which, "will chronicle the detailed testing efforts made by FF's engineers to bring a new species of electric mobility to the market and push the limits of FF's technology in a variety of demanding environments." This particular demanding environment, of course, is a 12.42-mile route that takes 156 turns to reach the 14,115-foot summit.

Faraday Future has not been subtle in its attempts to wrest the EV crown from Tesla, and the hill climb attempt could be seen as the latest version of that fight. Last year, a near-stock Tesla Model S P90D raced up Pikes Peak in 11 minutes and 48.264 seconds. That was enough to set a new record in the "Production Electric Car" category, previously held by a Honda Fit (12 minutes 55.591 second).

LOS ANGELES, 5 June 2017 – Faraday Future (“FF”) today confirmed that it will be participating in the 95th running of the Pikes Peak International Hill Climb, the first EV OEM to do so, bringing a new level of transparency to testing as it embarks on public engineering endeavors with FF 91 (“nine one”).

As part of this effort, FF will debut “Testing the FF 91,” a video series that will chronicle the detailed testing efforts made by FF’s engineers to bring a new species of electric mobility to the market and push the limits of FF’s technology in a variety of demanding environments.

The series will begin as FF’s team of engineers test FF 91 at the Pikes Peak International Hill Climb to further facilitate the internal engineering development of the vehicle. A track that climbs 4,720 feet from the starting line with a total of 156 turns stands as an essential proving ground for the vehicle’s thermal control systems.

“The hill climb on Pikes Peak serves as the ideal setting to further develop the electric propulsion system and supporting thermal systems of FF 91,” said Nick Sampson, Senior Vice President of Research and Development. “Testing the performance of FF 91 in real-world conditions sets the bar even higher as we bring the vehicle to market in 2018.”

Driving the FF 91 will be Robin Shute who also serves as Principal Engineer at Faraday Future.

FF is proud to be partnering with great brands like Pirelli, RECARO, and HRE Wheels to enhance the brand’s undertakings on the hill.

Faraday Future is a user-centric, advanced mobility company with headquarters in Southern California. Our global team leverages the talents of leading thinkers and passionate creators from the technology and automotive industries to bring premium, intuitive, and seamlessly connected electric vehicles to people worldwide.