Which Toyota Prius Prime Is Right For You ... Or Should You Buy A Volt? 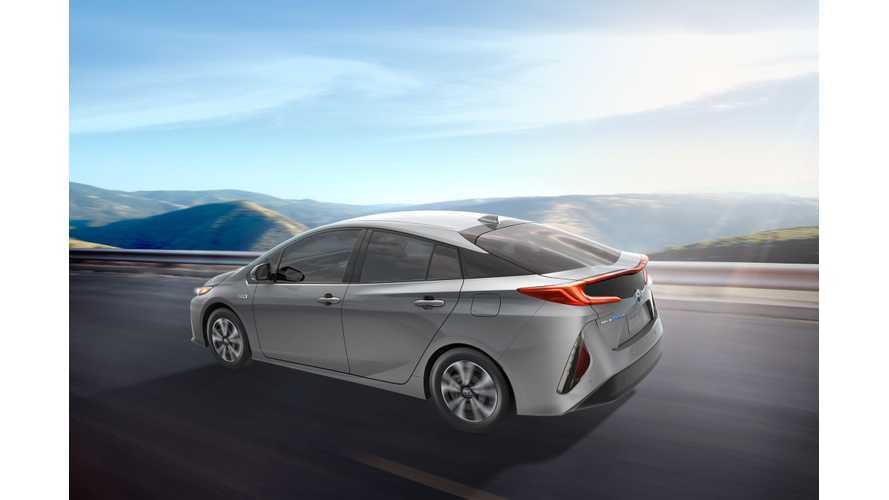 What distinguishes the remarkably successful Toyota Prius Prime's three trim levels, and is upgrading worth the cost ... or should you just buy a Chevrolet Volt?

Car and Driver calls the Toyota Prius Prime an anteater, or a platypus, but still prettier than the regular Prius, which looks like it was designed “by people obviously on psychotropic drugs.”

The publication tested all three Prime trim levels, to see how different trim levels' equipment affects vehicle weight and performance. All three use the same 95-horsepower 1.8-liter four-cylinder engine, two motors, a planetary gearset that works like a CVT, and an 8.8-kWh lithium-ion battery pack. The models are within 28 pounds of each other, have the same tires, and pulled nearly identical track stats.

Before we go into each model, let's share C & D's notable impressions:

The Prime does an adequate job masking small road imperfections, but watch out for potholes. It corners well, is very quiet, and feels surprisingly solid. It's definitely better as an electric car rather than a hybrid, but unfortunately you only get 20 or so miles, and about 12 on the freeway.

You will only get the Prime's full 121 horsepower in hybrid mode, which won't get you from zero to 60 mph in under 10 seconds. Put it in EV mode and you have surprising get up and go, but it's short lived in more ways than one (it takes about 2 seconds longer to hit 60 mph). It will start up in EV mode, and you can leave it there or put it in hybrid mode, or choose EV Auto, which allows the car to determine how to best use its powertrain combination.  The "CVT-like" transmission doesn't respond well to the engine's meager power, so you will find it difficult to initiate passing and merging procedures.

In terms of the interior, though the seat coverings vary dependent on the trim, the seats are basically the same, and offer sufficient comfort. Keep in mind that there is no middle seat in back, but the four passengers that you do choose to carry will have enough space. Materials are a typical mix of rubberized and soft-touch, and the layout is simple. The base comes with an intuitive 7-inch touch-screen infotainment system, and the upper trims get an 11.6-inch system. Sadly, the larger screen just magnifies the same graphics from the smaller screen and feels dated. It also takes away physical buttons for climate and audio control, which is a hassle.

The Prime comes in the entry-level Plus, the mid-level Premium, and the top-of-the-line Advanced. According to C & D, this is how they match up:

The Prime Plus starts at $27,985 and includes niceties such as LED headlights and taillights, heated door mirrors, automatic grille shutters, a 7.0-inch touchscreen with navigation, a 4.2-inch driver information display, automatic climate control, heated front seats, and a proximity key with push-button start. That equipment largely makes up for the $3625 price premium over the sparsely equipped base, non-Plussed Prius. Apples-to-apples, the Prime Plus is just $365 more than a similarly equipped Prius hybrid, which is called the Three in Toyota parlance. This test model rang in at $28,380, thanks to its $395 Hypersonic Red paint.

Next up the ladder is the $29,685 Prime Premium, which swaps out the Plus’s 7.0-inch infotainment display for a massive 11.6-inch, vertically oriented screen that mimics the built-in tablet in Tesla’s Model S and Model X. The only other upgrades are SofTex faux-leather seat upholstery in place of cloth, proximity-key sensors for the front passenger door and the trunk to augment the Plus’s one in the driver’s door, and an inductive phone-charging pad in the center console.

The top-spec Advanced commands $33,985 and adds a heated steering wheel, a color head-up display, an auto-dimming rearview mirror, parking sensors, a self-parking system, and remote controls for the HVAC system. The Advanced also is the only Prime that includes blind-spot monitoring, although adaptive cruise control, forward-collision warning, automated emergency braking, automatic high-beams, and lane-departure warning with lane-keeping assist are standard on all models. Next to special, extra-cost paint colors, no options are offered on any Prime.

All-in-all, C & D asserts once again that most people would be better off with a Chevrolet Volt. You can fit a fifth passenger, you get more than double the electric miles (53 according to the EPA), it looks nice, it drives and handles better, and it's more powerful (149 horsepower combined). The publication's test netted 60-MPGe over the Prime's 50 MPGe.

"Given all this, the Prime’s bargain status relative to the Volt seems more like cautious positioning on Toyota’s part than an incentive in its own right."