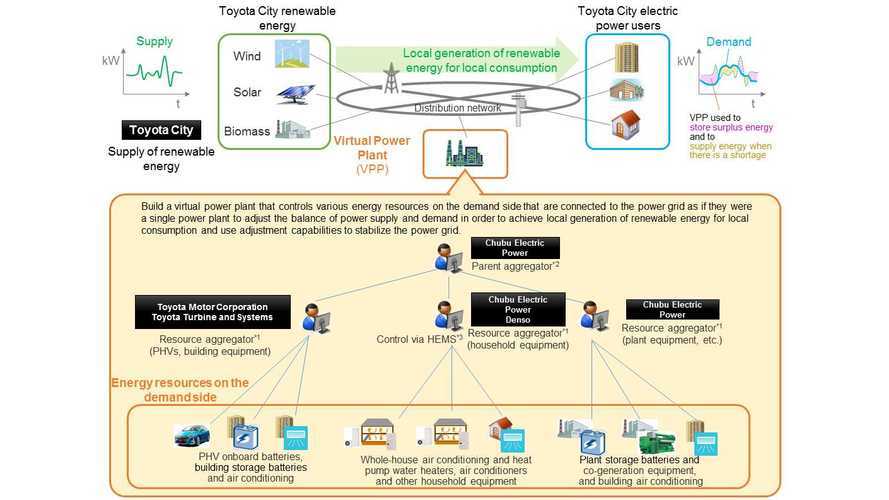 The Plug-in Prii are to be used as one of several elements to regulate power on the demand side (for example delayed charging).

Partners in the project are:

The project will be conducted through March 2020 with pursuit of the creation of a new business model.

"The project outlines the construction of a virtual power plant that will regulate electric power demand according to the supply of electric power generated from renewable energy in Toyota City and that will enable multiple user-side energy resources to function as if they were a single power plant."

"The virtual power plant demonstration project will use energy management to coordinate power demand according to the supply of wind, solar and biomass energy, which is susceptible to changes in weather and other factors, with the aim of verifying the feasibility of local production and consumption of carbon-free renewable energy.

Specifically, the project will use information and communications technology (ICT) to link plug-in hybrid vehicles (PHVs), heat pump water heaters, storage batteries and other items owned by households and businesses and to control the charging times of PHVs, the charging and discharging of storage batteries, and so on, to coordinate demand according to the supply of electric power generated from renewable energy. The virtual power plant, an innovative, next-generation energy management system that uses ICT, is to be created to establish fundamental energy infrastructure that contributes to such efficient use of energy.

In addition, electric power created by the virtual power plant will be provided to general electric power distributors to study the formation of new business that contributes to power-grid stabilization."

"The project will also investigate the usefulness of centralized control of storage batteries and other devices connected to a distribution network as one means of coordinating network voltage and direction of electric power flow with the aim of creating a power grid that enables further expansion of renewable energy."