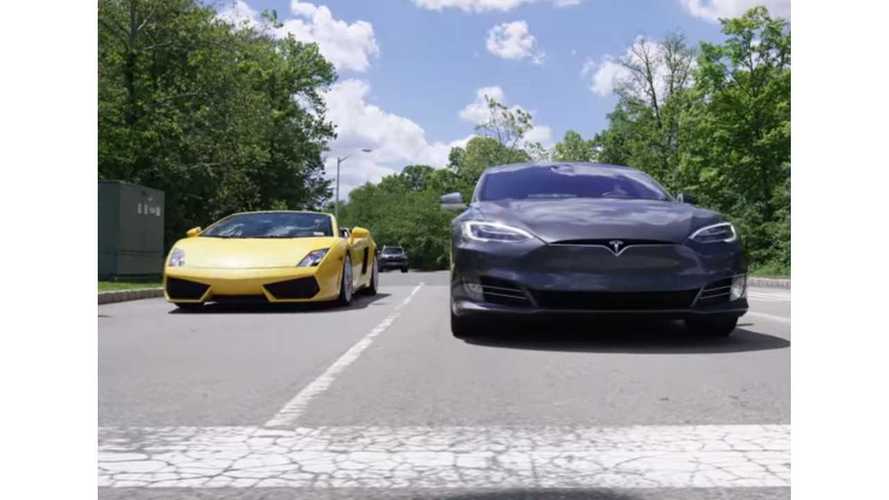 Tesla's Project Loveday fan-made commercial contest ends today, and of course the infamous Marques Brownlee (AKA MKBHD) got his entry in under the wire.

MKBHD hinted at the fact that he was submitting a video awhile back, but it was looking like maybe things didn't work out. But, now we have it, and it's a fun one.

The concept behind the commercial is simple: The Tesla Model S has a substantial amount of cargo capacity.

You can fit a few items in the back of the Tesla Model S.

Brownlee Summons the car out of his garage to head out on an errand run. He runs around to various stores and fills up the back of the Tesla Model S P100D with all sorts of gear, and there's still a tons of space left (he has the rear seats down, of course). His last stop leaves him with a few grocery bags, which could easily fit back there, but to prove a point, Brownlee pops the frunk and puts the bags in there.

It doesn't end there. That would be informative, but not very fun. On his way home, a Lamborghini challenges him at a light (you know, revving the engine and spewing carbon). Brownlee switches over to Ludicrous Mode. We don't get to see the results, but we all know who would've won. We also know that the Lambo was likely empty, aside from the driver. You can't put very much in most cars that accelerate like the Model S.

The video contest was previously extended, and ends today. The project came about after Tesla CEO Elon Musk responded to my 10-year old daughter's (Bria Loveday) Tweet recommending the idea.

Click here to take a look at our brand-new compilation of recent Project Loveday submissions.

Had a lot of fun making this - hope it's fun to watch!