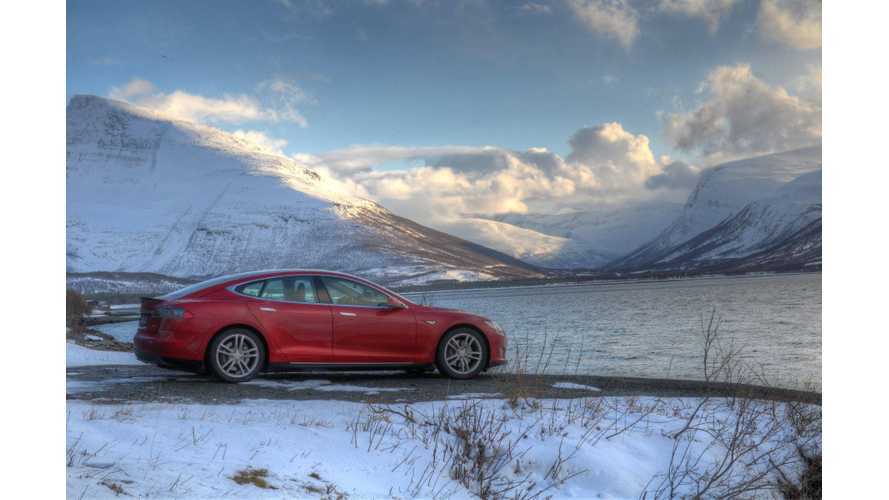 HERE'S HOW TESLA AND THE ELECTRIC CAR CONQUERED NORWAY

Norway has long been a standout country for Tesla. Bloomberg* explains that Norwegians are transitioning "to electric vehicles faster than anyone else on the planet. More than a third of all new cars are either fully electric or plug-in hybrids, well over 10 times the proportion in the U.S. With about 100,000 electrics on the road, Norway (population 5 million) trails only the U.S., China, and Japan in absolute numbers. By 2025, the government has suggested, there may be no gasoline- or diesel-powered cars sold in the country."

Editor's note:  In May, plug-in vehicles held a 32% share of all new automotive sales in Norway - details.

"It’s safe to say that Norway is the first mass market for EVs."

So why have electric vehicles (especially Tesla) taken off in Norway?

"Norway’s electric vehicle boom has been built on generous government incentives. EVs are exempt from car-purchase taxes and the 25 percent sales tax levied on just about everything else, and they get a break on annual fees. Drivers plug in for free at municipal power points, generally don’t pay tolls, and can use bus lanes to avoid traffic. On ferries across Norway’s deep fjords, electrics travel at no cost. It’s no surprise, then, that Norwegians call gasoline-powered vehicles fossilbiler—fossil cars."

Above: An investigative report about Norway's electric vehicle movement; note: filmed prior to Trump backing out of Paris climate accord (Youtube: PBS NewsHour)

Christina Bu of the Norwegian EV Association, a consumer group with 40,000 members, explained that when the first truly electric vehicle competitive options came to market, the Nissan Leaf and the Tesla Model S, suddenly, “the market expanded before politicians realized what was going on.” It also doesn't hurt the electric vehicle market when "gas costs about $7 a gallon at local pumps, and the tax exemptions are compelling because the country has long levied auto taxes that can double the price of a new set of wheels. 'Pay for two cars, get one,' goes a weary maxim."

Above: A quick snapshot of how Tesla and the electric car movement grew so quickly in Norway (Source: Bloomberg*)

"Yes, we made a lot of money on oil, but we know there are downsides to the product, and we try to take the world to the next level... It’s not like the world is not going to need oil in 10 years, but maybe you’re not going to use it for transportation."

The bottom line: More than a third of new cars in Norway are electrics or plug-in hybrids, thanks to breaks on taxes, tolls, and lane restrictions. And, that's a good thing — not just for Tesla but as a shining example for the worldwide clean energy movement overall.