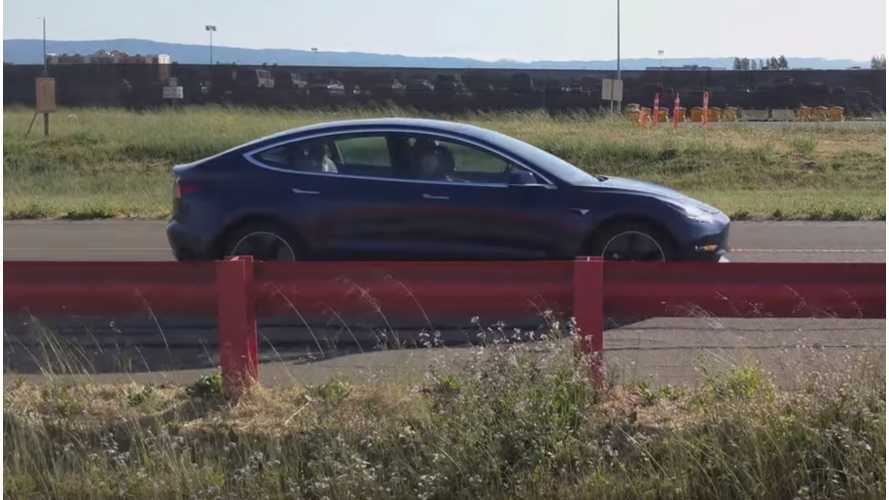 Besides Tesla's VIP factory tour and private Model 3 viewing for the last round of content winners yesterday (details), we also got to see one of the best looks at the upcoming Model 3 out testing on the company's Fremont test track yesterday via YouTuber Andree Batiuk.

We aren't exactly sure what is happening with the Model 3 at the start of the video, as the frunk is open and some work on the car is underway.

Update: Another video (below) of the Model 3 on the Fremont track has surface

The video suggests there may be a breakdown of some type happening, but as far as we know there isn't much drive hardware upfront;  however there does seems to be some 'on the scene tweaking' of the car on the track - perhaps some suspension work?

Eventually the Model 3 gets going and does some laps for us to enjoy before heading out on the local roads.

"We spotted a blue Model 3 on the Tesla test track, only to notice its frunk was open, and the employee was standing around waiting. A model S quickly speed to the scene and unloaded some tools. They had the car going again shortly thereafter. We watched as the 3 did a couple of laps.

As we were leaving, it ended up in front of us, so we followed it, first as it dropped off some people to their car in a parking lot, and then to a "secret" base of operations away from the factory, where it was tucked inside. This "base" was an unmarked building, where 20 unfinished Superchargers sat in the parking lot."

Video (below): Another Model 3 track video from yesterday (apparently shot during a California earthquake) has popped up online via Electrek: