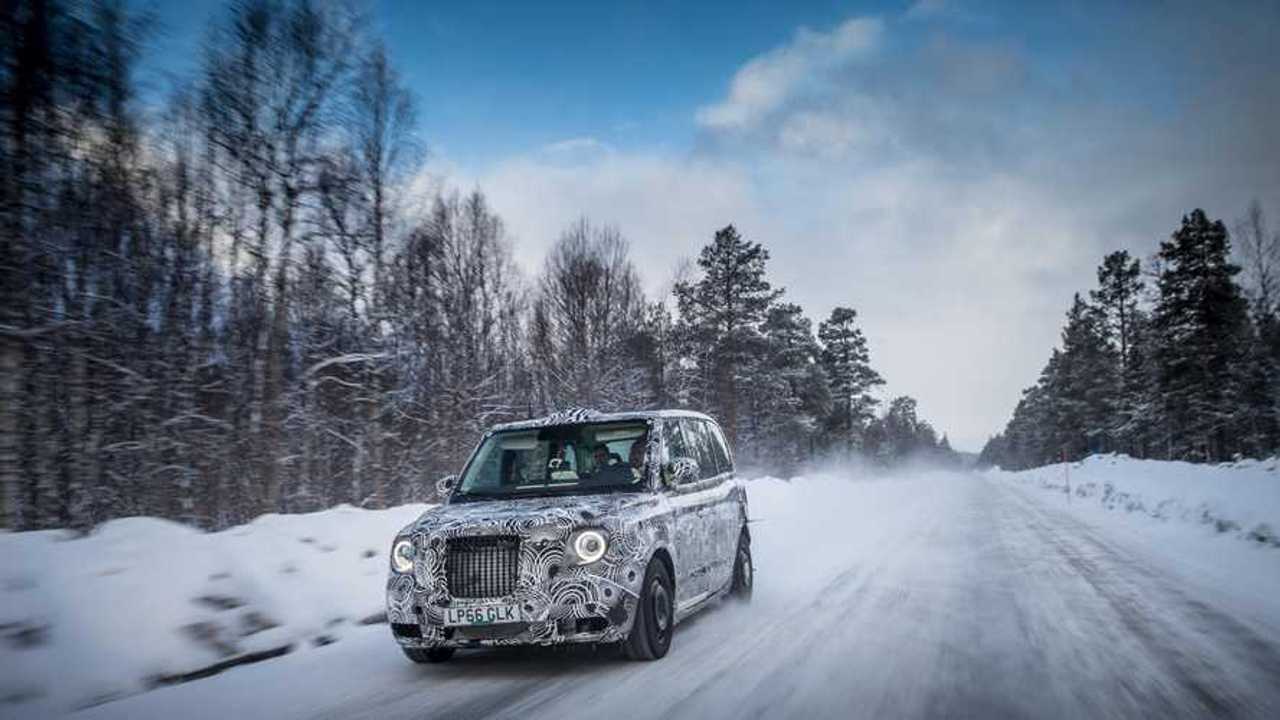 The London Taxi Company (which is subsidiary of Chinese-owned Geely) released a video and some photography of recent tests for its all-new, range extended, electric taxi from the Arctic Circle in Norway.

The plug-in hybrid will enter sales in the fourth quarter of 2017 in the UK, after extreme cold and hot climate tests are executed.

The tests are needed to prove endurance in real life environments of -15°C, with vehicle performance to be tested even at -49°C:

"These pictures from the London Taxi Company (LTC) demonstrate just part of the extreme testing programme the all-new electric black cab is undergoing in LTC’s most comprehensive product quality programme in its 98-year history.

Underway now in the lower reaches of the Arctic Circle in Norway, the extreme cold climate testing is just part of the new programme LTC has developed to ensure the highest levels of quality, reliability and usability for demanding taxi usage cycles before launch later this year.

Testing the vehicle in a real life environment of -15°C helps LTC ensure that the battery and range of the vehicle are not disproportionately affected by cold weather.

However, extreme cold weather testing is not just to guarantee battery performance, it also serves to check the quality of driver and passenger experience in cold weather. This means checking that cab heating and ventilation continue to perform to the highest standards – no matter how bitter the temperature outside. Driving experience is also checked – so the impact of grip, drivability and visibility are also checked. LTC engineers can then make adjustments to ensure that drivers have the best drive regardless of the conditions.

This regime to check the vehicle performance in even the harshest conditions will only get more stringent over the coming weeks, with the vehicle set to be cooled down in giant fridges to -49°C. These checks will seek to guarantee that the vehicle will always start, even after the coldest nights.

The new range extended electric taxi will also undergo similar endurance testing in extreme heat environments before it is deemed ready for sale.

On sale in the final quarter of 2017, LTC’s new electric taxi will be the most comprehensively tested and developed product in the company’s history, as Quality Director Wolfram Liedtke explains:

“Our new taxi is being developed with two key engineering principles – quality and endurance to meet the needs of the demanding taxi duty cycle.  We are now nearing the end of our development programme, and will soon commit the product to series production at our all-new manufacturing facility in Ansty, near Coventry”

“We understand drivers will want to be sure that our range extended electric vehicle technology works in all conditions which is why we’ve gone to such efforts to test in these extreme environments. It will be, without doubt, the highest quality and resilient product in London Taxi’s history.”

Wolfram brings to the London Taxi Company huge experience having run manufacturing plants across Europe during his career which includes 10 years as Executive Director for Quality at GM Europe and 4 years as Quality Director for premium car maker Jaguar Land Rover.

The feedback of cab drivers is a hugely important part of the development of this vehicle too. So Steve McNamara, General Secretary at the Licensed Taxi Drivers Association, also joined LTC for part of the testing.

“It was truly amazing to witness the new London black cab being tested in such an extreme climate and performing so well. This new clean modern 21st century vehicle will ensure that the world’s best cab drivers now have the best tool for the job” said McNamara.

London Taxi Company CEO Chris Gubbey added: “2017 is a momentous year for the London Taxi Company, and I am very proud to be leading the business at such an exciting time.  Our brand new manufacturing facility in Ansty is now complete and will be officially opened later this month, and shortly after the all-new range extended electric taxi will enter series production.  The first dedicated and zero-emissions-capable taxi in the world to enter series production.”

He added: “As proven in these wonderful images from the Arctic Circle – chosen not just for its extreme climate, but also as a symbol of our zero-emissions-capabilities being tested in the cleanest air environment on Earth – we really have put the new vehicle through its paces.  Given these extremes of testing – both in hot and cold climates –   we demonstrate that our vehicle will be a taxi for London and the world over, capable and at home in any city.”"