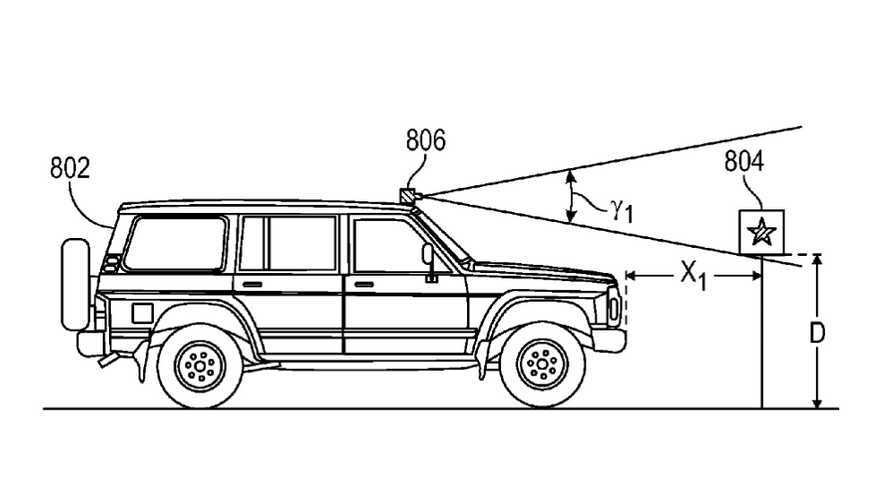 If you want a smarter EV, it'll need to know what's going on.

The last time we strolled through Faraday Future's patent garden, we found phone-powered door locks and a way to text someone the ability to access your car. Today, we're got smart doors and a car that checks up on you. Oh, and what is up with Faraday's tendency to use image that obviously show non-Faraday-brand vehicles in its filings? We've got the Jeep/Land Cruiser thing above and the Chevy Volt concept last time. So strange.

Let's start with the Faraday patent about a car – probably not a Jeep – that moves to a "target location" not with GPS but by seeing something that it has stored in its memory. Or, as the patent calls it, "a marker having a known characteristic (e.g., shape, size, pattern, position, etc.)." Faraday says that cars should be able to figure out where they are in relation to nearby objects, to assist with automatic parking as well as EV-specific purposes: "The vehicle may be an electric automobile and the desired location may correspond to a battery recharging station. The recharging station may be located in a public place such as a parking lot or garage or in a vehicle owner's private garage, for example. In some examples, when the vehicle moves to a close proximity of the recharging station, charging can begin automatically so that a driver does not need to manually connect the charger and begin charging the vehicle." Automatic charging? Sounds good to us.

Faraday also wants to be able to detect what the people in the car might be doing inside the car. Using "a plurality of sensors," the car the patent describes relies a bit on tech we talked about last time, where you could share your car with someone else, and if you do and you maybe don't trust them all the time (the word "teenager" appears a lot in this patent), then the car could alert you – the owner, who is far away from the vehicle – that the driver is texting, for example.

Faraday also filed a patent for a "System and method for operating vehicle door." That may not sound all that interesting or patentable, but the idea is worth exploring because it's more complicated than the headline suggests. First, like, for example, the falcon-wing doors on the Tesla Model X, the doors under discussion here will have some sort of sensors to detect things around them, something like ultrasonic, radar, a camera, or lidar (the company sure likes its sensors, doesn't it?). The doors need to be smart because Faraday wants the car to beep at you if you're about to open them up and scratch the neighboring car. Alternately, the door might not open up all the way if it senses an obstruction. Here's how the patent describes the problem:

A vehicle door is usually equipped with a handle. Such handle is often located below the outer belt line of the door and allows people to manually open the doors. Although this method may be easy to implement, there are some shortcomings. For example, an operator may have to carefully move the door in order to avoid the contact between the door and an object in the vicinity of the vehicle (for example, another vehicle next to the vehicle), which may cause damage to the door and/or the object. Therefore, it may be desirable to detect one or more objects that may be in the path of a door when it is moved to an open position.