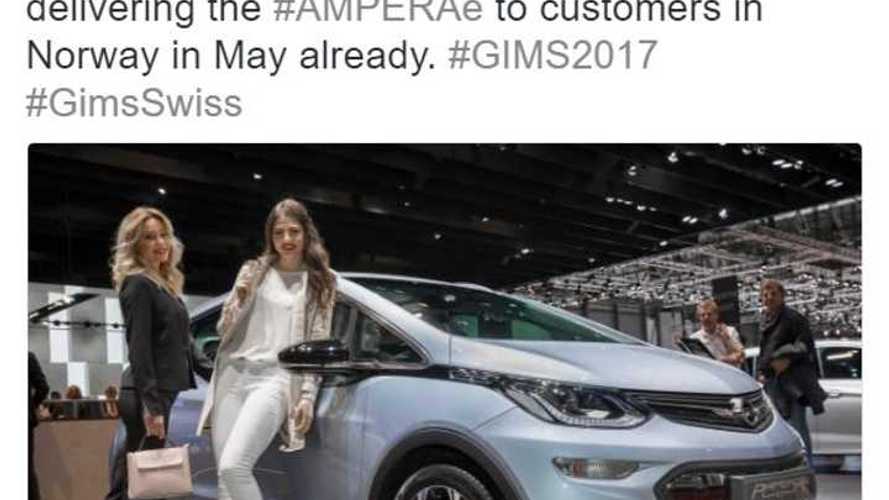 With a simple, single Tweet, the CEO of Opel has confirmed that Norway will get its first batch of Ampera-e electric cars starting this May.

Karl-Thomas Neumann, CEO of Opel, took to Twitter during the 2017 Geneva Motor Show to announce that Norway will be the first country to receive the Ampera-E (Chevy Bolt cousin) starting in May.

Eye-catchers: The new Opel Ampera-e and the Golden Gate Bridge.

That's a full month ahead of the June target for deliveries announced in February.

Opel has been slowly moving up the launch date of the Ampera-E in Norway due to overwhelming demand. Previously, Opel spokesperson Stein Pettersen stated that in Norway alone, customers have already placed “4 digits” worth of orders, with a hint that the figure is actually approaching 5 digits.

Norwegians with Ampera-E orders now have less than 3 months to wait for first deliveries.

Germany and France are expected to be next in line to receive the Ampera-E following Norway.

“The availability of the Ampera-e will be limited due to a slow ramp-up of production at the Orion plant in Michigan. Therefore, we made a decision to go with a staggered introduction plan going first with the countries that already have some form of EV infrastructure in place or countries that have shown ambition to become EV leaders. This has created the pecking order Norway, Germany, Netherlands, France and Switzerland."

"However, we are flexible here and will be able to add countries or change the order at short notice if somebody becomes so attractive because of changed policies for example. Our goal is to have enough capacity by 2018 so that we can offer decent volumes in most European countries."