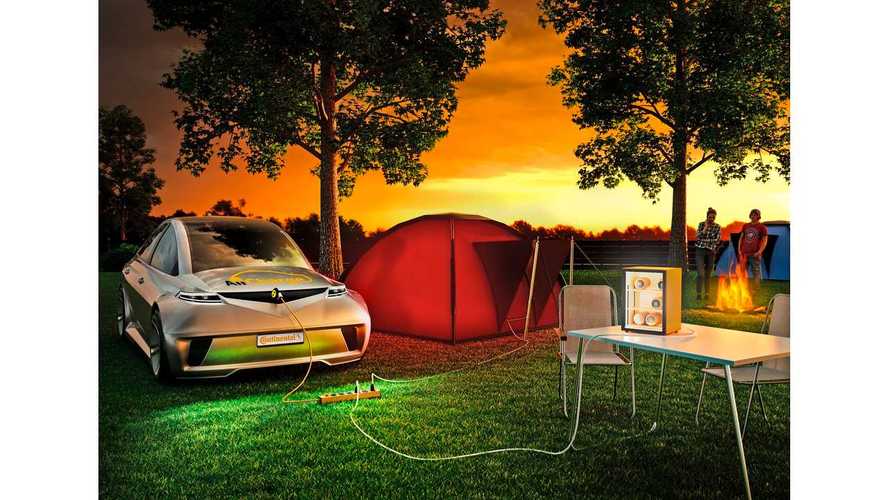 Continental has announced its new "AllCharge" technology, which via an electric vehicles's powertrain, enables a ‘universal charger’ system, capable of supplying up to 350 kW at up to 800 V.

Like with Renault's Chameleon system (in the ZOE), Continental uses the electric motor and an inverter (instead of on-board charger) to charge using 1-phase or 3-phase AC, but additionally AllCharge also offers DC charging (straight through the inverter).

On the vehicle side, there is single CCS Combo connector, and two possible charging current paths to the battery:

The basic idea is simple. Rather than cramming the car with extra technology to match all the different types of charging station, Continental turns the electric powertrain itself into a ‘charger’. Dubbed the ‘AllCharge’ system by Continental, this technology is based on the components of a conventional electric powertrain (comprising electric motor and inverter – for switching between DC and AC power). Since constant AC/DC switching at different voltages is already an inherent feature of the electric powertrain, these components already possess all the necessary capabilities to function as a charging system. By exploiting these capabilities, Continental is now able to provide interoperability with different charging technologies using an onboard, vehicle-based solution.

As well as being able to charge their vehicle at any charging station, at an output rate of up to 800 V and up to 350 kW, drivers also have 230 volts of AC power available for onboard use if needed. The AllCharge system’s V2D (vehicle-to-device) technology also allows the vehicle battery to be used to power mobile electrical devices ranging from a laptop to a refrigerator or an electric drill.

“Today, EV drivers often end up parking at a charging station that doesn’t allow them to charge as fast as they would like,” says Dr. Oliver Maiwald, Head of Technology & Innovation in the Powertrain Division at Continental. “With Continental’s AllCharge powertrain, drivers no longer need to worry about finding the right type of charging station. Their vehicle is equipped for every type of technology, from single-phase or three-phase AC to high-speed DC systems. Maiwald added “the maximum benefit can be reached for urban AC charging stations, here a 12 times faster charging is possible.”

Recharging an electric vehicle still leaves something to be desired in terms of everyday user-friendliness. For example the selected charging station may only offer slow single-phase AC charging or alternatively, if it does offer high-speed DC charging, the vehicle itself may not be equipped with the necessary technology to support this. Efforts to expand the current infrastructure confront a recurring dilemma: single-phase and three-phase AC charging stations, which are cheaper to install and therefore the most widespread type of charging point, entail relatively long charging times, making them impractical for long trips, while high-speed DC charging stations, with their expensive technology, are still very few and far between. What’s more, many electric cars are not yet equipped for high-voltage DC charging.

“What was always lacking up until now was some sort of universal solution capable of working with any type of charging station,” says Dr. Martin Brüll, who is a responsible expert for the new charging system. “Such a universal solution is now available in the form of AllCharge.” Drawing on its expertise, technology and production experience, Continental has developed an innovative system which is basically a modified electric powertrain in which the electric motor and inverter (which switches between DC and AC power) have been specially adapted to handle the additional task of charging. The only extra component involved in this system is a DC/DC converter, whose job is to ensure an optimally regulated power flow to the battery at all times.

Five minutes charging time gives up to 150 km of range

The vehicle is equipped with a single cable connector, but there are two possible charging current paths to the battery. In the case of AC current, the current flows from the charging station via the electric motor to the inverter, where it is converted into DC current before being supplied to the battery. In the case of DC current, the current from the charging station flows directly through the inverter to the battery. AllCharge works with any type of charging station, and can operate at a rate of up to 800 V and a power from 150 kW today and up to 350 kW for special premium applications. “With 350 kW DC charging, five minutes charging time provides approximately 150 km of driving range – a good indication of our charging system’s true potential,” says Dr. Brüll. “No matter how quickly the infrastructure develops in future, a vehicle with AllCharge technology will always be able to make the most of the selected charging station’s capacity.” At the Continental Tech Show and IAA 2017, Continental will host the first ever live demonstrations of the AllCharge system.